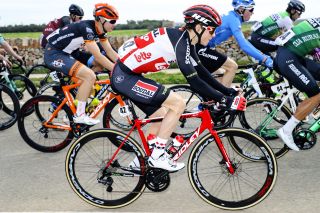 Norway's Carl Fredrik Hagen will leave Lotto Soudal at the end of the 2020 season to join Israel Start-Up Nation on a two-year contract, where he'll ride in support of fellow 2021 signing Chris Froome, his new team has announced.

Norwegian channel TV2 reported the transfer at the weekend, which was subsequently confirmed by WorldTour outfit Israel Start-Up Nation on Tuesday.

"It's going to be exciting and fun to be integrated into a new team, which hasn’t yet reached its full potential," said 28-year-old Hagen, who only turned professional with Lotto Soudal in 2019, having previously ridden for Norwegain Continental sqiads Team Joker Icopal and Team Sparebanken Sør.

"We'll build up together towards success in the coming years," he continued on his new squad's website. "I'm looking for a role and an opportunity to achieve some good results in the GC and individual stages, as well as to support the team captains to success in the mountains.

Carl Fredrik Hagen: This season has been much better than I expected

"My drive to get better is what's bringing me forward. I'm never satisfied, even when I’m in great shape. I'm 28 years old and still feel like I have lots to learn and accomplish on my bike. I look forward to continuing this journey and evolving in the right direction with ISN," he said.

"We believe he has the potential to go further," he said. "We see him having a double position in the team – he can learn and gain more expertise while being a great help to our other riders, and will get his own chances in other races, including Grand Tours. I value his attitude – he has both feet on the ground and clear ambitions and goals for his future career with us."

Team owner Sylvan Adams added: "I'm really pleased to add a talented rider like Carl Frederik Hagen to our team. His eighth-place GC finish in last year's Vuelta is indicative of his potential – both for himself and as a support rider for Chris Froome at the Grand Tours. Welcome to the ISN family, Carl Frederik!"

Hagen is set to return to racing action with Lotto Soudal at the Tour de l'Ain in France from August 7-9, followed by the Critérium du Dauphiné (August 12-16).

Although he is not part of the squad for the Tour de France, Hagen is set to start the second Grand Tour of his career at the Giro d'Italia, which will this year run from October 3-25.