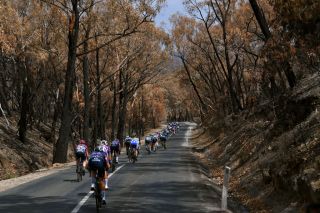 Stage 3 of the Women's Tour Down Under passed through an area hit by recent bush fires (Image credit: Getty Images)

All the prize money from Sunday's Schwalbe Classic, the circuit race that kicks off the men's Tour Down Under, will be donated to the South Australian communities affected by the on-going bushfire crisis, the race organisers have announced.

Race headline sponsor Santos have already donated AU$600,000 to the South Australian government's Bushfire Appeal, Adelaide Koala Rescue and the Lifeline Community Recovery programme, but have also pledged to match the event's fundraising efforts over the next week.

"As major sponsors of the Santos Tour Down Under, we'll match every dollar raised for bushfire recovery during the event," said Santos managing director and CEO Kevin Gallagher in a press release on Saturday.

"The Santos Tour Down Under includes race routes traveling near impacted areas in the Adelaide Hills, and we encourage people to get out and support these communities who are doing it tough right now and will really benefit from visitor-spending in their towns," he said.

Richie Porte takes aim at 'climber-friendly' Tour Down Under

The race organisation will also be asking fans attending the otherwise free teams presentation and concert in Adelaide on Saturday evening for a 'gold coin donation' – $1 or $2 – with all donations going to the SA Bushfire Appeal and the Country Fire Service (CFS) Foundation.

Trek-Segafredo's Richie Porte, who won the 2017 Tour Down Under and will try to end 2018 and 2019 champion Daryl Impey's (Mitchelton-Scott) reign next week, urged fans to support the communities affected by the fires.

"Riding through the affected areas, the world is going to see how devastating the fires were. When we race around those areas, you take for granted the beauty of the gum trees, and the koalas that all the Europeans are trying to spot.

"I think it's a good thing to bring the race through those affected areas. Go up there, buy your coffee and support the local businesses," Porte said.

Meanwhile, Katusha Sports – clothing suppliers to the Israel Start-Up Nation WorldTour team – have organised a charity auction of various signed cycling jerseys, in collaboration with the Tour Down Under, which fans can bid on throughout the week of the race.

All money raised will go to the New South Wales Rural Fire Service, with the state of NSW having been particularly badly hit by the fires.

More information on what's available, as well as being the place to bid on items, can be found here.

With support from @tourdownunder we’ve rallied riders from across teams to donate signed jerseys for an auction for RFS fire relief in Australia: open for one week: https://t.co/tMKCBoaSYE pic.twitter.com/jRpHLKRWyuJanuary 17, 2020