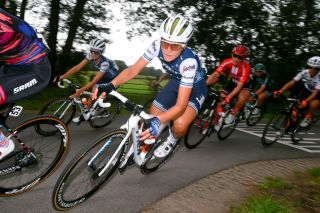 Trek-Segafredo's Elisa Longo Borghini says that she's excited to finally be able to begin her 2020 season at three races in the Basque Country this week, starting with the Emakumeen Nafarroako Klasikoa on Thursday.

Two weeks ago, Longo Borghini joined teammates Audrey Cordon-Ragot and Anna Plichta, along with members of the men's Trek-Segafredo squad, for an altitude training camp in San Pellegrino in the Italian Dolomites. The members of the women's squad have now rejoined their teammates in Spain in readiness for the three upcoming Basque races, with the Emakumeen Nafarroako Klasikoa on Thursday, the Clasica Femenina Navarra on Friday and the Durango-Durango Emakumeen Saria on Sunday.

Longo Borghini will race all three races, as will Ellen Van Dijk, while the other members of the team will swap in and out, riding one or two of the one-day races.

"I have good memories from Durango, and the Basque Country in general," Longo Borghini said on her team's website on Wednesday, having finished second at the Durango-Durango in 2016 to US rider Megan Guarnier, and in fourth place in both 2018 and 2013.

"I must say, I really like to race here. In a way, this feels like the first day at school," the 28-year-old Italian said. "I love racing, I'm made for racing and I'm just so excited to take the start, together with my teammates.

"The training in the Dolomites went really well," explained Longo Borghini. "We had a great group of riders and staff. I'm grateful to now be reunited with my team here in Spain after such a long lockdown period, and I'm very much looking forward to racing with them again.

"We have a very strong team here, even if, personally, I don't know how my form will be, as I'm coming straight from altitude, and that can sometimes affect my performance in the first couple of days, but I'm so ready to race," she said.