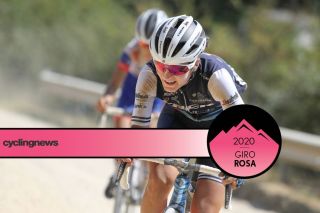 This has turned out to be a year where Italians could do with a good reason to smile, and Elisa Longo Borghini wants to give them one.

The Italian rider has long been the nation’s greatest hope at the Giro Rosa, the marque stage race on the women’s calendar, which this year will wind its way around the streets of central and southern Italy. The climbing filled nine-day race is set to start on September 11 after being rescheduled from its normal mid-year time slot after the global COVID-19 pandemic -- which hit Italy hard and early -- put a halt to racing.

The race director has touted the Giro Rosa as a “chance to get out of the greyness that this year does not seem to want to abandon” and it is hard to think of a better way to inject colour, excitement and joy than with the success of a local rider.

“It has been a tricky year,” said Longo Borghini, who lives in Ornavasso in the hard hit north of Italy. “I really want to create some emotions for the people that are watching us because as an athlete, to be fair, you are a bit useless. We are not doctors, we are not the people from the truck that are carrying essentials to the supermarket, we are not helping anybody actually.”

“The only thing we can do is create emotion in people that maybe suffered and make them smile,” said the Trek-Segafredo rider in an interview with Cyclingnews. “This is what I would like to do. To make people happy to see an Italian rider at the top of the Giro, or an Italian rider with a national jersey doing well at Worlds. We are made for this and I’d like to give some good emotions to people that suffered.”

It has been more than a decade since there has been an Italian winner of the prized overall jersey, the Maglia Rosa, and Longo Borghini is the only Italian rider to have stood on the overall podium in the last five years. This makes her the obvious choice for the nation’s cycling fans to pin their hopes on.

The 28 year-old Trek-Segafredo rider has won the blue jersey of the top Italian rider at the Giro Rosa five out of the past six years, she won the youth classification back in 2012, the mountains classification in 2016, came 2nd overall in 2017 and has rarely been out of the top 10.

Longo Borghini is so often present near the front of the race, but a chance to throw her hands up in the year in victory with a stage win at the Giro Rosa has eluded her … so far.

The form she is carrying into her ninth Giro Rosa could change that.

As COVID-19 restrictions eased through Europe and UCI level racing restarted in late July there were so many question marks over just how key riders would fare, with the impact on training varying from nation to nation. Women’s cycling viewers and riders alike were looking eagerly for any hints of form in those early events to see just who had managed to maintain the training and motivation even as the outlook for the return of racing was so uncertain.

Longo Borghini was one rider that didn’t find it difficult to maintain her drive, determined to repay a supportive team whenever racing did return in this “strange season”.

“I wanted to be ready. Not in top shape, but of course in a good shape that could actually permit me to be helpful for the team and allow me to maybe strike some results,” said Longo Borghini. “In the end, it worked out pretty well.”

Longo Borghini went out on the attack in those early races, to help gauge how her competition had emerged from the break. “You understand, as soon as you are in the peloton, by looking at the others how they are.”

It didn’t take long to see the key riders and potential Giro Rosa rivals that had emerged from the forced racing break with the hunger and fitness to deliver. However, it is clear from the results and in race action so far that Longo Borghini belongs squarely among the list of formidable foes.

“We all know how strong Elisa is and she has shown just that at the recent races,” said Trek-Segafredo head director Ina-Yoko Teutenberg. “Mentally she is in a really good place. Elisa lived through lockdown in Italy and she came out of it stronger than ever.”

Longo Borghini has already climbed into the top 5 of the world rankings this season, even when she only had her first race of the season in July.

One of her most impressive performances of recent weeks was when she bought home silver from the European Championships road race, going toe to toe with the ever powerful Annemiek van Vleuten (Mitchelton-SCOTT). The Dutch rider may have won in the end but Longo Borghini demonstrated that she has both the physical form and mental toughness to challenge the powerful World Champion and two-time Giro Rosa defending champion.

Impressive as that ride was it only tells part of the story. The consistency of her results, even while sacrificing herself for teammates, adds volumes. Longo Borghini has come across the line in sixth place or better in every race, bar one, since the season restart. That includes a first at the Italian National Championships in the ITT and two road race podiums.

Just like her Giro Rosa record, this season is one that has been filled with excellent results but not that road race victory where she gets to throw her hands in the air in celebration … not yet anyway.

Ready to break through

Longo Borghini is lining up at the Giro as one of the team leaders at Trek Segafredo, a talent packed team which is entering the race on a high. The team now tops the rankings, after having finished fifth in its debut year, 2019. Longo Borghini’s string of results near the top of the field have been instrumental in this, with her contribution only coming second to that of  Lizzie Deignan. Teammate Deignan’s victories at GP de Plouay and La Course have put her on top of the Women’s WorldTour leader board.

Longo Borghini was a crucial ally in both victories and Deignan commented after La Course that she now hoped to try and pay the Italian rider back for all her amazing work at the Giro Rosa.

The final Giro Rosa team is yet to be named but it is fair to say Trek-Segafredo has some impressive options, even though Lucinda Brand, who finished fourth in 2018, isn’t expected on the start line. Along with Deignan, there is US champion Ruth Winder, the ever hard-working teammate Tayler Wiles, newly-crowned French champion Audrey Cordon-Ragot as well as time trial powerhouse Ellen van Dijk, who has quite a reputation for inflicting pain on her rivals with a fierce turn of pace.

All in all this means Longo Borghini gets to face up to her home tour in fine form, with everything to race for as part of a talent packed team that has hit its stride.

“I’m excited but I also know there are many strong riders that will make me suffer a lot,” said Longo Borghini, who has been anticipating a tough competitive edition ever since the route was announced in August, particularly given that the absence of races this season will concentrate the focus of the best of women's cycling.

The performance of the lead contenders since the route was announced has done nothing to dampen those expectations. It’s been rare to see the winner of the last two editions of the Italian stage race, van Vleuten, fail to take the top step in whatever race she lines up for. Two-time winner Anna van der Breggen (Boels-Dolmans) has not long taken out one of the toughest battles in women’s cycling, the Dutch National Championships, and Ashleigh Moolman-Pasio (CCC-Liv) will be hoping to make up for missed opportunities in the shortened season, launching back into racing following a training crash right before the Strade Bianche.

Teutenberg is, not surprisingly, cagey about the exact strategy the team will use to try and best their rivals: “you will have to wait until the race starts.”

However, it is fair to say they are likely to start off on the front foot, with the opening 16-kilometre time trial playing to team strengths.

Longo Borghini said she feels the Giro Rosa is a good opportunity for the team to perform well, but she doesn’t feel pressure about the GC.

“Right now I just want to dive into the race, enjoy it and go with the flow,” said Longo Borghini. “Raising my hands would be really nice, but we will see.”

If she does get that opportunity it is bound to be a popular victory that would achieve her aim of putting a smile on the faces of many in Italy, and no doubt beyond as well.