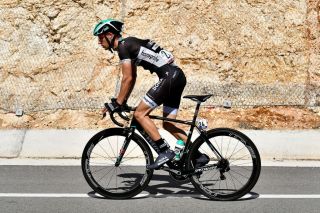 The penultimate stage of the 2018 Tirreno-Adriatico may well have been the final race of Leopold König’s career, but if it was, he isn’t saying. Czech publications have reported in recent weeks that he will not return to the peloton, but König, an enigma to the last, has declined their repeated requests for comment.

It is certain, however, that the curtain has fallen on his tenure at Bora-Hansgrohe. His three-year contract was due to expire at the end of this month, and manager Ralph Denk confirmed at the team presentation in Bavaria last week that König, who recently turned 32, is not on the roster for 2020.

“I have really no information,” Denk told Cyclingnews. “He informed me in the middle of 2018 that he was sick, and he could not ride, and we found a really good agreement with him to keep the door open. I said to him, ‘If you are ready to race, come back to me.’ But in the end, he never called me and said, ‘I would like to race again.’ And now his contract is over and he is free, but I don’t know if he is retired.”

Konig out of Giro d'Italia with knee injury

König had spent four seasons with Denk’s team in its previous iteration as NetApp, winning a stage of the Vuelta a España in 2013 and then placing 7th overall at the Tour de France the following year. Those displays earned him a move to Team Sky in 2015, when he finished 6th overall at the Giro d’Italia and helped Chris Froome to Tour victory.

A persistent knee injury ruined his second season at Sky and he returned to Denk’s squad in 2017, by which point it had rebranded as Bora-Hansgrohe and stepped up to WorldTour level. It was a troubled kind of homecoming. The same knee injury that blighted his time at Sky ruled König out of the Giro and Vuelta, limiting him to just 20 race days in total in 2017.

König evinced optimism at the beginning of the next season, stating that he planned to ride the Giro and Tour, but his 2018 campaign was a short-lived one. After completing one leg of the Challenge Mallorca, he abandoned Tirreno-Adriatico on the penultimate stage, and never donned Bora-Hansgrohe’s colours again in competition.

He remained on the Bora-Hansgrohe roster for the 2019 campaign, although he never appeared at any races or team gatherings. Denk declined to comment on whether König was still being paid by the team in that period. “He was still in the team roster,” Denk said. “We make no financial comments, but he was in the team and if he was able to race, he could call me.”

Knee and back problems were reportedly the cause of König’s abandon at Tirreno in 2018, though the precise reasons behind his eventual uncoupling from Bora-Hansgrohe – and, it seems, professional cycling at large – remain unclear.

“First, he had some injuries on the knee. When he came to us on the team in 2017, it was really not easy for him to get to the level you need in the WorldTour,” Denk said. “Then, I don’t know what was the final problem for him to stop cycling, or not to race in 2019. You’d have to ask him, I have no further information.”

König was once a prolific presence on social media, commenting on political and social issues in the Czech Republic as much as his own career. He was critical of the country’s populist president Milos Zeman, for instance, and encouraged young people to vote in the presidential election in early 2018. König ceased posting to Twitter and Instagram in March 2018, however, just prior to his final appearance for Bora-Hansgrohe.

Since then there has been only silence. There have been no more training photographs from his Monaco base or updates on his race programme. There has, indeed, been no communication at all, with the general public, the media or Bora-Hansgrohe.

“He was betrayed by his health, otherwise he might have been somewhere else,” one unnamed rider told the Czech edition of the Welovecycling website in a recent profile of König. “But in the end, his head betrayed him.”

“König wanted to end as a king,” read the headline of the article, “but he leaves without fanfare and without words.”