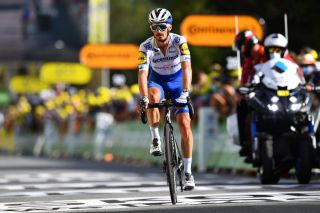 Julian Alaphilippe (Deceuninck-QuickStep) began a new phase of his Tour de France during stage 12 when he went on the attack in search of his second win of the race, but he had to settle for 11th place as Marc Hirschi (Team Sunweb) soloed to victory in Sarran.

Aided by his teammate Dries Devenyns, Alaphilippe attacked from the peloton on the final climb of the Suc au May with 27 kilometres remaining in the 218km stage, the longest course of this year's Tour. The Frenchman brought a strong group of riders with him, but they were unable to organise a cohesive pursuit of Hirschi, who had already gone on the attack on the preceding Côte de la Crouz du Pey.

Alaphilippe made a couple of lone attempts to bridge the sizeable gap to Hirschi, but those efforts did little to help the collaboration in the chasing group. The Frenchman lost contact with his companions on the final drag to the line, coming in 1:48 down on Hirschi.

At the finish, Alaphilippe acknowledged that he had expected the early break to stay clear and had instead earmarked Friday’s finale at Puy Mary as offering a better chance of stage victory. Once it became apparent that Bora-Hansgrohe’s pace-making effort would keep the peloton close to the early move, however, Alaphilippe began to formulate a plan of attack.

“I had favoured making an effort on tomorrow’s stage, but in the end it was fast today thanks to Bora, so in the end the situation was good,” Alaphilippe said afterwards. “Dries [Devenyns] and Bob [Jungels] who helped me get a bit of a gap. After that, I made my effort, but it was complicated.”

The complicating factors were twofold. Hirschi had already impressed in placing second to Alaphilippe in Nice on stage 2 and third in Laruns on stage 9, and the Swiss youngster underlined his quality with a fine solo effort here. He crested the summit of the Suc au May with more than 30 seconds in hand on his pursuers and he extended his advantage over the other side, where his teammates Nicolas Roche and Søren Kragh Andersen helped to disrupt the chase effort.

“Congratulations to him, it was another nice numéro from him, he deserved to win,” Alaphilippe said about Hirschi's first pro victory. “We did the maximum behind, but it wasn’t easy. Everybody wanted to make as little effort as possible but, in the end, Hirschi was out in front and he wasn’t asking himself any questions.

“I’m disappointed but I did the maximum, and Hirschi was the strongest today. No regrets.”

Alaphilippe waited for the steepest section of the Sac au May to go on the attack and he offered a gnomic response when asked if he should have gone on the offensive sooner in order to catch the Swiss rider.

“You need to make the effort at the right moment. I made my effort on the climb. It wasn’t too late, but it was really at the last moment, and unfortunately that wasn’t enough,” said Alaphilippe.

When the Frenchman sat up from the chasing group in the closing kilometres, it initially looked as though he had some mechanical issues, but he said afterwards that this was not the case.

Since exiting the general classification battle on the first day in the Pyrenees, Alaphilippe has been content to concede minutes and drops down the standings in the hope of being granted more freedom to go on the attack in the latter part of the Tour. He is now almost an hour off Primoz Roglic’s (Jumbo-Visma) yellow jersey.

“There are four stages coming up with a difficult profile that suit me quite well, starting with tomorrow,” Alaphilippe had said at the start in Chauvigny on Thursday, when he downplayed the prospect of chasing the king of the mountain title. “Eventually that could become an objective, but right now the priority is to take on this second part of the Tour with a lot of motivation and freshness.”