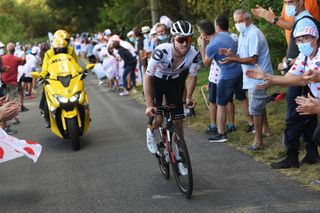 "It's unbelievable because I was two times close. Today I never believed I could make it because it was really doubtful. I went full gas the last few hundred metres. It's super nice - I can't describe it, it's hard to find words.

"I was always doubting because they were close. I had that picture in mind from the last two stages I was close, so really the last kilometre was the first I believed I could make it. It's my first pro victory and at the Tour - it couldn't be better, it's like a dream. It feels incredible.

"It gave me a lot of confidence, I think otherwise I would not have attacked on this climb solo. I know I'm strong so it kept me confident, when I was solo it just gave me this extra power. I knew I couldn't get three times in a row on the podium.

"I'm super thankful - it's really really nice. It's my first pro victory. I never believed that I could win a stage here [Tour de France] - just to start here is like a dream, and now I have a victory and two podiums." (ASO)

"Marc Hirschi was unbeatable today. We’d created a strategy for [Peter] Sagan, with me and then Lennard (Kämna) to go into the attacks, but it proved to be too hard. There was nothing any of us could do today. Hirschi was stronger than all of us." (RAI)

"If I’d tried harder to win the stage I would be disappointed. I tried my best but [Marc] Hirschi was the strongest today.

"I made the effort and thought it was the right time not to got for it, but Hirschi was too strong. But tomorrow I’ll give it another try." (Deceuninck-QuickStep)

"It was maybe not the easiest [stage]. We expected a breakaway to go immediately in the beginning but the guys from other teams were pulling strongly. Again, not really a rest day I guess.

"Today was, I think, a good warming up again. Tomorrow probably we have to expect an even harder stage in the end.

"Hopefully we just continue riding like this with the whole team. Tomorrow there is a new challenge in front of us." (ASO)

"It was a long stage, over 200 kilometres. There was a lot of stress because they were racing for the time bonuses. Things finally calmed down after the break went away.

"I think we’ll really feel it in our legs tomorrow. It’s a hard stage, with steep climbs and so will affect the GC." (RAI)

"Finally there was not a battle for the GC, but we were the whole day thinking about the bonus seconds that were in the last climb. Finally the breakaway has taken the time but it was a really hard day.

"Bora [Hansgrohe] was pulling really hard for Sagan trying to fight for the green jersey. It was a really hard day and, for sure, tomorrow we will feel it in the legs. We have seen the stage [tomorrow when] we did the recon. The last 2 kilometres are really steep and really hard. We need to arrive there as fresh as we can and try to do our best because for sure there will be a difference." (NBC)