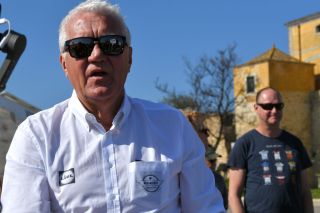 Deceuninck-Quickstep manager Patrick Lefevere is famous for his outbursts against the UCI, race organisers and other teams.

"It's very hard but there is a rule. And if we apply it severely to others, then it's the same for us," Lefevere said to Le Parisien.

"The yellow jersey is not above the others. If nobody had warned the riders that we couldn't refuel in the last 20 kilometres, then it would be different. But everybody knew that – although clearly someone in our team didn't."

Deceuninck-QuickStep directeur sportif Tom Steels said after the stage that of course the team was aware of the 20km rule, but added that the spot was the only place they could safely pass over a bottle.

"It's a pity to lose yellow like this. We know about the 20-kilometre rule," he said after the stage. "It was quite dangerous at 70kph, then there was a flat part to get in position for the climb. It was the only spot we could still give a bottle.

"It's a special Tour, everybody has to be careful with the bottles and we have to stay away from the public, too. So were the circumstances as to why we missed the 20-kilometre mark by two kilometres. We made a mistake, and there's nothing we can do about it.

"Of course, in cycling, that means losing your jersey if you fall, have a flat tyre, a mishap or if you come across someone stronger than you," Lefevere said. "But to lose it for such stupidity... What's more, the person who committed this stupidity is from our team.

"And so nobody can be happy. I'm not. Julian didn't deserve to lose it like that, but the rules are the same for everyone. It's unbelievable. At the finish, we had two jerseys: yellow for Julian and green for Sam Bennett. Then, suddenly, we only had one again."

However, after a tumultuous start to the rescheduled block of races and two of Deceuninck-Quickstep riders being hospitalised from terrible crashes – Fabio Jakobsen at the Tour de Pologne and Remco Evenepoel at Il Lombardia – the Belgian put losing the Tour de France leader's jersey into perspective.

"You know, with our seriously injured riders like Fabio Jakobsen and his 130 stitches in his face, I have to put things into perspective. It will pass like a gust of wind, and we'll raise our heads again. All this is just a small thing."