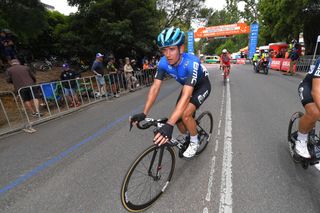 Ryan Gibbons at the Tour Down Under (Image credit: Getty Images Sport)

A win is a win, real or virtual, and Ryan Gibbons (NTT Pro Cycling) hopes that his commanding sprint victory on stage 1 of the Virtual Tour de France will help cement his place in the real thing when racing properly resumes in the next few weeks.

Gibbons, who hasn't taken part in the real-world Tour de France before, was in contention for a debut slot this July but with racing paused due to the global pandemic the South African was forced into lockdown over much of the spring and early summer.

With racing on the cusp of resumption across most of Europe, the age of online racing prominence is about to come to an end but Gibbons' victory on stage 1 of the Virtual Tour de France was still a moment to celebrate.

How to watch the Virtual Tour de France – live stream, TV and results

"It's really special," the 25-year-old told Cyclingnews in a Zoom press conference. "It's my Tour de France debut and I'm really grateful to be part of it. Fingers crossed but it was originally the plan for me to go to the Tour de France.

"But obviously there's so much importance in this. It draws fans and it's a unique tool and I'm sure that the team will be looking at this to see where our form is at.

NTT has been a competitive force in the online gaming side of racing since lockdown began in mid-March. On stage 1 of the Virtual Tour, the team were consistently present and visible at the head the race. For Gibbons, that comes from a sense of collective motivation and proper communication.

"We have a system that keeps us connected and it's almost like a race radio," he said. "We have our coaches and directors chatting to us. So on the last lap we had Reinardt Janse van Rensburg trying to set things up and attacking just to get a chase.

"In the end it worked out for us but we knew what we were doing at all times. Like anything, regardless of whether it's a virtual race or a Grand Tour you have to put in the work. We have a great set-up here with riders based here in Girona. We get together and it's about simulating a race, away from a race."

With the yellow jersey held by the team ahead of stage 2 of the Virtual Tour de France, the South African rider is determined to help keep NTT's successful run in the race going.

"I can't give too much away but this win was a statement and every race we go to, whether it's a punchy one like today, a sprint or a climbers stage, we just go with the best possible team that we have and we'll try and win as many as we can."

The Virtual Tour de France continues on Sunday. Find out how to watch the race here.