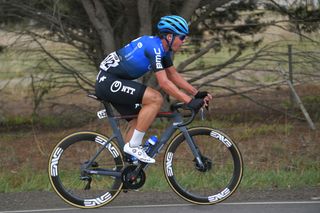 NTT Pro Cycling's Ryan Gibbons topped off what was a winning weekend for the WorldTour team when he won the South African road race championships at the Swadini Forever Resort in Mpumalanga on Sunday.

Twenty-five-year-old Gibbons had lost out at last year's men's road race, finishing second to Impey – who also took his ninth national time trial title this year – but the top-two positions were switched for 2020, and the NTT rider will now proudly wear the South African champion's jersey in all road races for the rest of the season.

"I'm really relieved, more than anything else," said Gibbons in a video posted on Twitter after his win. "I think the last two years I've been kind of plagued, so just to have a smooth ride was the first goal, and then to get the win is just really, really great for me and for the team.

"I only had two guys here: one from the Continental team, Marc [Pritzen], and Stefan [de Bod], and the guys absolutely sacrificed themselves for me, and I'm really, really going to enjoy wearing the South African colours this year."

It was a hugely successful couple of days' racing for the South African team formerly known as Dimension Data, which this year has Japanese parent company NTT as its main sponsor, with former rider and former Saxo Bank team manager Bjarne Riis having been announced at the start of the year as the new manager and co-owner of the team.

On Saturday, Australian Ben O'Connor had climbed to a stage victory on Mont Bouquet at the Etoile de Bessèges, while sprinter Max Walscheid won the bunch-sprint finish to stage 3 of the Tour de Langkawi in Kuala Lumpur the same day.

In addition to Gibbons' national title on Sunday and Giacomo Nizzolo's stage victory at last month's Tour Down Under, it means that NTT already have four wins to their name just a month-and-a-half into the season, and are well on their way to beating their disappointing haul of just seven victories during the 2019 season.

🇿🇦 #SAChampsWhat a day for @RyanGibbons23, his family, our team, partners & fans as he takes the SA title! 🎥 Quick thought from Ryan after today's ride. 🖐️#BicyclesChangeLives pic.twitter.com/ft4r1aBuWVFebruary 9, 2020