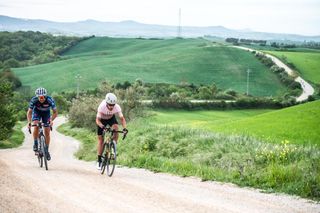 Riders on the gravel roads of Tuscany during the 2019 Nov Eroica (Image credit: L'Eroica)

Giancarlo Brocci, the creator of the Eroica events on the gravel roads of Tuscany, has told Cyclingnews he is keen to organise the first official UCI-sanctioned gravel World Championships. He believes that gravel riding and racing can become a new cycling discipline that helps the sport move away from modern professional road racing and helps people reconnect with nature and so themselves.

UCI president David Lappartient recently revealed that the sport's governing body is considering creating a gravel World Championships and is looking at ways to regulate gravel so it can develop into a global sport.

Some of the existing gravel events in the USA and gravel riders pushed back at the idea of the UCI stepping in to take control, but Brocci sees a way forward that benefits everyone.

UCI sets rules on use of gravel in road races

"We'd love to organise a Gravel World Championships, I can’t think of a better place for it than here in Tuscany on our strade bianche gravel roads that inspired the original Eroica event," Brocci told Cyclingnews in Gaiole del Chianti, the Tuscan village north of Siena, where the original L'Eroica event is held every autumn.

"We've created something special with L'Eroica and our events around the world, so I think Eroica can help gravel racing, too. We've got a proven record at organising events and I think we'd be able to put on a great World Championships and a great event."

Brocci created the original L'Eroica event with a group of friends in 1997 to try to capture the emotions of the heroic cycling of Fausto Coppi and Gino Bartali, when races often covered dirt roads and captured the hearts of a generation. The Eroica series now includes events around the world and has been copied many times. Participants have to use bikes built before 1987 and fitted with traditional pedals but in recent years other modern Eroica events have been added to the calendar, with Nova Eroica in late April covering many of the same Tuscan strade bianche or white roads but on modern bikes.

Brocci also organised the under-23 Giro Bio stage race between 2009 and 2012, helping to clean up the Italian amateur racing scene by forcing riders to undergo constant medical checks, sleep in dormitories away from their directeurs sportifs, and spend time together rather than on their mobile phones.

Brocci is convinced he can combine the intrinsic values of cycling with gravel riding to create a new sport. He visited Lappartient at the UCI headquarters in Aigle, Switzerland in early January, presenting his ideas.

"There are three big banners at the entrance of the UCI offices: road, track and mountain bike. I told him we have to create another one," Brocci explained.

"Some people call it gravel, I prefer to call it Eroico (Heroic) because for me it's about going back to the roots and core beliefs of cycling and away from the modern robotic sport that has developed. I'm not looking back; I want to help the sport move forwards.

"Riding off-road, away from the traffic and immersed in nature, has developed rapidly in recent years for a whole range of reasons. It's perhaps become a fashion and a way to sell more bikes for some, but it's genuine and truly enjoyable. It's what cycling is really about."

A new form of cycling

Brocci hopes that gravel racing can respect these values and inspire people. He wants races to be 'heroic' perhaps by covering up to 300km and starting at night. Any form of in-race mechanical assistance would not be allowed, power meters and computers would be banned, and anti-doping would be very strict and cheating of any kind discouraged to ensure the credibility of the events.

Brocci is keen to introduce a minimum body fat percentage to deter riders from unhealthy, extreme diets and constant strength-to-weight calculations. Drinking in moderation is encouraged rather than banned, so that the best riders socialize with every other participant. The best riders would be seen as role models and friends, rather than elusive stars, hiding away in hotels and team buses.

Taking part rather than winning at any cost would form the spirit of the new form of cycling and racing.

"I don’t want to change the current model of professional cycling that is controlled by business interests, sponsors and rights holders. They can keep their version of cycling and we'll see where it takes them," Brocci said.

"I want to create a new form of cycling that reignites our love for the sport, involves everyone and celebrates the beauty, the fatigue and the authenticity of cycling."