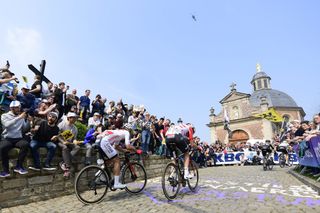 AIGCP [the association of men’s professional road cycling teams] has come out against the UCI's planned 'Classics Series' that is set to be implemented next season as part of the major reform package.

In a strongly-worded statement sent to media Thursday, the group said it rejected key elements of the Classics Series, a new category of one-day races that would fall inside the current WorldTour calendar and include the five Monuments: the Tour of Flanders, Paris-Roubaix, Liege-Bastogne-Liege, Milan San-Remo and Il Lombardia.

"AIGCP’s support for the 2020 Reform approved in September 2018 was conditional on setting up the envisaged competition of one-day races (“Classics Series”) on a consensus basis with all stakeholders, including the teams with their riders, and on the basis of an inclusive business plan and ownership model where the rights of all parties would be recognised and respected," the group's statement read.

"Such Classics Series was meant to be a stepping stone towards the true reform that men’s professional road cycling needs: to change the current broken economical (sic) model which over the years has done much harm to the sport, not only the teams and their riders, but also to many race organisers.

"However, the teams lament that no substantial progress has been made in this regard. In fact, the teams’ and riders’ rights are neither being recognised nor respected and the current approach and proposed regulatory framework do not deliver on the promised structure which would finally enable the stakeholders to realise the economic change that this sport desperately needs," the statement read.

"Accordingly, the AIGCP has formally informed the UCI of its rejection of the Classics Series as it is being implemented by the UCI and that no team or contracted rider may be associated with any such Classics Series without the express consent of that team."

The UCI announced its plans for the Classic Series in 2018, a series inside the WorldTour calendar that would encompass the five Monuments and about 20 other one-day races.

There are 21 one-day events listed on the UCI's 2020 Men's WorldTour calendar – the same events as 2019, starting with the Cadel Evans Great Ocean Road Race on February 2 and ending with Il Lombardia on October 12, 2020.

The rules for the Classic Series require the top three Pro Continental squads – now called UCI ProTeams, with rankings determined at the end of the previous season, to be invited.

The organisers of the UCI Classics Series events must invite all WorldTour teams as well, leaving only three or four wild-card spots for lower-ranked teams when there are 18 WorldTour squads. If there are 20 WorldTour squads, as there could be in 2022, then organisers are left with only one or two places for the new ProTeams.