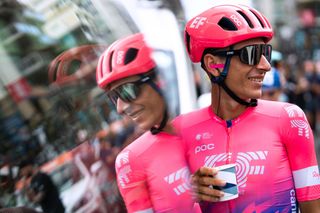 EF Pro Cycling’s Lachlan Morton enjoys a morning coffee ahead of the start of stage 5 at the 2020 Tour Down Under (Image credit: Getty Images)

Morton is currently racing on the road at the Tour Down Under in South Australia, and the WorldTour stage race received a visit from UCI president David Lappartient earlier in the week. The Frenchman spoke at length on a number of issue with the attending media, including Cyclingnews, and one of the topics discussed was the growth of gravel riding and racing.

"You can see that it is very popular worldwide and it has huge potential for development; you can see the fans of cycling love gravel riding," Lappartient said. "We are working on this at a UCI level because we believe there is a big future for this."

Asked whether that meant that there could eventually be an official UCI Gravel World Championships, complete with a rainbow jersey awarded to the winner, Lappartient replied: "I think so. This is something that is under discussion and that is possible in the future."

Talking to Cyclingnews about the growth of the gravel scene, and about his role in his EF Pro Cycling team's decision to follow an 'alternative racing programme' alongside its WorldTour road racing programme, Morton emphasised the differences between the nascent gravel scene, which is particularly strong in the US, and the more traditional road events that remain popular in Europe.

"I guess it's almost not for me to say," Morton said of the UCI's plans on Saturday – the morning after having shaved his head for the Salvation Army's bushfire relief efforts.

"That's not because I don't want to comment on it, but that I don't think gravel racing belongs to us. I think as far as the racing element goes, it's kind of more of a grassroots movement, and I think anyone who's in that scene would tell you that they already have a world championships in the Dirty Kanza," he said.

The Dirty Kanza – which takes place in late May each year, starting and finishing in Emporia, Kansas – has become arguably the best-known gravel event in the world, and featured on EF Pro Racing's alternative racing calendar last season, with Morton taking part alongside teammate Alex Howes, Trek-Segafredo's Peter Stetina and thousands of other riders of all abilities.

"I'm sure the UCI are aware that they have to adapt. But the reality is that gravel riding is just bike riding," he said. "You don't need a gravel bike, you don't need disc brakes; you just go ride your bike on a dirt road and you can call it whatever you want.

"And I think the reason events like Dirty Kanza are so successful is that they're mass participation events," added Morton. "Anyone can come and line up, and you get to the end of the race and you can shoot shit with the person who finished six hours behind you because you've had a shared experience. I find it hard to imagine a UCI event where they're going to let anyone line up."

As the gravel discipline continues to grow, the likes of Stetina and former WorldTour riders Ian Boswell and Laurens ten Dam have all recently announced that they'll turn their attention to gravel and adventure racing in 2020.

"I think it's good to see guys jumping across to it, and seeing it as a viable option to continue racing. The WorldTour is a high-pressure environment; it's hard, mentally. So the idea of a 20-year career in a WorldTour environment is hard to get your head around, because it's a lot of stress, a lot of pressure, whereas you can jump in and do these other races and kind of have more of a life outside," said Morton, who will continue to race at various gravel, adventure and mountain bike events with EF Pro Cycling this season.

"I see my future in racing different disciplines," he explained, "and I see the future of bike riding being more and more multi-disciplined, and just more that the whole thing is bike riding – not, 'Oh, you're a road rider,' and, 'You ride gravel.' It's all just bike racing, so let's all celebrate it for that."