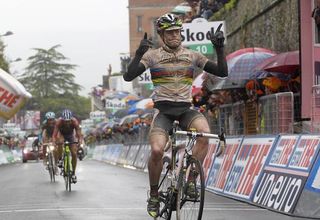 In its latest revision of its rules for road races, the UCI has laid down several new regulations on the use of sections of unpaved roads in races.

Road races across unpaved roads have created such intense interest in races like Paris-Roubaix, Strade Bianche and Tro-Bro Léon and stages of the Grand Tours that traverse similar sectors, that a whole separate genre of gravel racing has been created to reproduce these experiences for amateurs.

Unpaved sections have upped the drama in Grand Tour stages such as the one in the 2010 Giro d'Italia, where Cadel Evans triumphed on a stormy day over the white roads of Tuscany, the Colle dell Finestre in the 2018 Giro d'Italia where Chris Froome put in his race-winning attack and the cobbled stages of the Tour de France such as the one that propelled Vincenzo NIbali to his overall victory in 2014.

Nathan Haas: I would love to ride a Gravel World Championships

The UCI rules seem to seek to limit the impact of unpaved sections in sporting terms, putting into the rules requirements for race organisers to ensure "the event runs smoothly in sporting terms and with regards to the equitable treatment of participants".

The rules also state that the UCI must be notified that an unpaved road will be used at the time the race is registered on the calendar – typically months before organisers finalize their routes.

Last year in the Vuelta a España, Miguel Ángel López (Astana) was on the attack when he crashed on a section of gravel road that led to the finishing climb on stage 9. He said the gravel and mud damaged his bike and there was no way to get support.

Luckily, López was able to limit his losses, but the new UCI rules will require organisers to provide more information to teams about the length, type of surface, difficulty and width of any unpaved sections, providing photos or videos if necessary.

The organisers will also have to ensure that unpaved sections can be traversed in any weather condition by road bicycles, ensure the safety "of the riders, spectators and race followers" on the course and ensure follow vehicles are suitable for the section and that drivers have "the necessary skills" to pilot the vehicle over it.

The UCI says it "may refuse to register an event on the calendar and/or refuse the inclusion of an unpaved section".