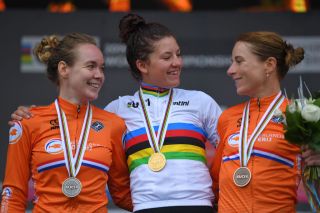 American team Twenty20 has chosen to forgo a UCI Continental licence and instead compete as a women’s domestic elite team under USA Cycling in 2020. Team owner Nicola Cranmer told Cyclingnews that the decision will not affect time trial world champion Chloe Dygert, who will focus only on time trials and track racing in her approach to the summer Olympic Games in Tokyo.

"We have a very specific schedule for Chloe this year, as we do every year," Cranmer said. "She will be racing road in North America only. It’s not necessary that we are UCI, there are zero benefits to us with our schedule this year. Track and time trials will be her focus."

Dygert won double world titles in the junior women's time trial and road race in Richmond in 2015 and has since spent most of her time training and racing on the track where she is a five-time world champion. She competes during the road season for development team Twenty20. Up until finishing fourth place at the UCI Road World Championships last September, she had never ridden a race in Europe nor one as long as the elite women's 150km parcours in Yorkshire.

Dygert-Owen: Aiming for the next six Olympic Games

Just days prior to that road race, she dominated the individual time trial to win the world title ahead of Anna van der Breggen and former two-time champion Annemiek van Vleuten.

Dygert is a major prospect for an Olympic gold medal this summer, and has a stated goal of racing in the time trial and on the track. In fact, she told Cyclingnews that she intends to follow in her coach Kristin Armstrong’s footsteps and compete at the next six summer Olympic Games. Armstrong is a two-time world champion and three-time Olympic gold medallist in the discipline.

The UCI Continental licence would have cost Cranmer and UCI fee of €6,500 (roughly $7,000) plus USA Cycling processing fees of roughly $4,000, for a total of just under $11,000. A list of the associated fees for team registration can be found at USA Cycling's website. There is also an up front $25,000 bank guarantee, which is not a UCI fee but the amount of money put into a blocked account that can be used by the UCI to protect the riders’ rights to be paid if their team does not comply with their obligations.

According to Cranmer, it was worth it to acquire a UCI licence in previous years, and pay the licence fees and keep a bank guarantee, because it allowed domestic teams to be invited to WorldTour events like the Tour of California.

A team like Twenty20 races primarily on the domestic scene in North America, and does not travel overseas to race in other WorldTour events during the season, so a UCI licence, at least for this year, wasn’t worth the higher fee and bank guarantee holdings.

Cranmer said that she saved roughly $30,000 by not having to pay the combined UCI / USA Cycling licence fee to be a UCI Women's Team, and not having to continue to hold the $25,000 bank guarantee. She instead paid USA Cycling a $400 registration fee to become a Women’s Domestic Elite Team along with the $350 RaceClean fee, which will get her team into all of the events across North America.

She said that she will get the bank guarantee back now and when she applies for a UCI licence again next year, she would have to submit those funds for holding again.

"So, yes, 11K in the UCI / USAC fees are avoided and the payment of the bank guarantee is 'saved' ... we have always been able to pay the bank guarantee fee but it's hard for teams just to come up with that fee just to sit in a UCI bank account," Cranmer said.

"It wasn’t necessary to register as UCI as the only domestic race we needed the licence for was Amgen Tour of California. Our freedom as a non-UCI team gives us agility to respond to the rapidly evolving multi-surface race events, overall race calendar, sponsor models and media coverage."

Twenty20’s roster includes Dygert along with Jennifer Valente (USA), Jasmin Duehring (Can), Georgia Simmerling (Can) and Sofia Arreola (Mex), who will be focussing on selections for the Tokyo Olympics.

"With five athletes heading to Tokyo our focus will be North America," Cranmer said. "Track racing plays a big part of the schedule for these athletes and the UCI Track World Championships begin at the end of February."