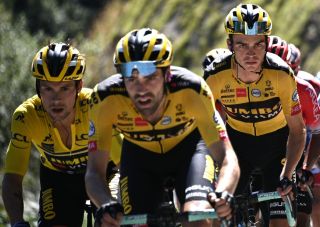 Tom Dumoulin described the opening descent of the fourth stage of the Critérium du Dauphiné as "a disgrace" after his Jumbo-Visma teammate Steven Kruiswijk crashed out, dislocating his shoulder.

"It was a disgrace that that descent was in a race," the Dutchman said of the road coming down from the Col de Plan Bois in the heart of the Alps.

"The whole descent was really tricky but the first two or three kilometres were full of gravel, pot-holes, bumps in the road, 15 per cent drops down. That they still put things like this in a race is… well, I'm really angry about it and I'm pretty sorry for Stevie that he has to go home because of this because he was in great shape."

Dumoulin added: "I hope he's going to be okay for the Tour. But even if he makes it, it's not ideal for his preparation. But this downhill should never be in a race."

The Dutchman explained that the Jumbo-Visma riders had been told it was "a tricky descent.

"But you're fighting with all of the other teams to get to that downhill first," explained.

"We had the lead but eventually, FDJ sprinted to the top and took over. They set an okay pace on the downhill, but there was the gravel on the road and he just slipped away."

Asked about Jumbo-Visma's strategy of racing with three leaders, himself, Kruiswijk and Primoz Roglic, Dumoulin responded: "We know that in cycling anything can happen at any time, both positive and negative. That's one reason why we'd like to go to the Tour with more leaders because you'll never know what will happen. Today showed that that strategy is not a bad one. But hopefully, we can start the Tour with three leaders."

Teammate Wout van Aert was also critical of the descent.

"I hope his injuries are OK and we'll see as soon as possible whether he can keep building up towards the Tour because it was a really unfortunate crash on a really silly road," he said.

Jumbo directeur sportif Grischa Niermann agreed with his riders' take on the incident.

"The riders saw it better than me because I only saw Stevie lying there. But the asphalt was really broken in parts. It was only for a kilometre but it was very dangerous. It was over the top," he said.

"He crashed on a corner and dislocated his shoulder and I think they could only put it back in when he got to hospital. We have to wait and see how he is," Niermann added.