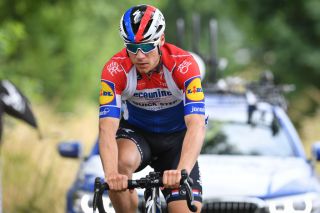 Jakobsen suffered list of brutal facial injuries in the crash after being nudged into the barriers by Jumbo-Visma sprinter Dylan Groenewegen at the end of stage 1. He's likely to return to racing, though Vanmol said there is "no deadline" for him doing so.

"I have to say that his condition is very good, especially considering the seriousness of the accident he had," Vanmol told Sporza.

Patrick Lefevere: It was a very dirty action by Groenewegen

"Since no vital organs have been affected, we obviously hope for the best. He is also fully conscious. He can't talk yet but is communicating via text message.

"We assume that, yes. But I dare not stick to a deadline," he added when asked about Jakobsen's prospects of a return to racing.

23-year-old Jakobsen suffered a shattered palate and windpipe, and broke bones in his face in crash, later undergoing a five-hour surgery before he was placed in an artificial coma.

Vanmol said that Jakobsen could be transferred to his home country, the Netherlands, at the end of the week, adding that the main remaining concern is over aesthetic and muscular damage to the face.

"I think he will be ready to be transferred to the Netherlands at the end of the week," said Vanmol.

"Our only concern is a little bit of aesthetic damage, or a little much. This may also apply to the activity of the muscles around the mouth.

" He depends on the information he gets from me and the doctors, and we are positive in every way. And so, he has hope for recovery."

Jumbo-Visma have suspended Groenewegen pending UCI disciplinary proceedings against the Dutchman, who veered from his line on the downhill charge into Katowice.

Meanwhile, the rider's union, the CPA, has called for standardised barriers at race finishes, and Deceuninck-QuickStep boss Patrick Lefevere has threatened legal action against Groenewegen.