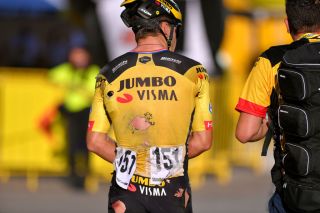 Dylan Groenewegen broke his collarbone in the crash at the end of the Tour de Pologne stage 2 (Image credit: Getty Images)

Jumbo-Visma have suspended Dylan Groenewegen amid the fallout from the Tour de Pologne crash that grievously injured Fabio Jakobsen (Deceuninck-Quickstep), pending an outcome of the UCI's Disciplinary Comission's review. Groenewegen "broke a rule of sportsmanship", according to team manager Richard Plugge.

Jakobsen came out of a medically-induced coma on Friday and faces a long and difficult recovery from multiple fractures to his face and damage to his trachea. He was taken to the hospital after the crash in Katowice in serious condition.

After undergoing five hours of reconstructive surgery on Thursday, his condition was upgraded after doctors found no evidence of serious neurological damage.

Groenewegen sparked the crash when he moved right, closing down a fast-approaching Jakobsen's path along the barriers, after hitting out too early. He gave an emotional interview with Dutch broadcaster NOS on Friday, saying he is sorry for what he did.

"Let's be clear that I never intended to endanger other riders," Groenewegen said. "But this was clearly my fault. I deviated from my line and I shouldn't have."

The crash was made far more violent because the road-side barriers, meant to keep spectators separated from the course, gave way as Jakobsen made impact. In addition to seriously injuring the Dutch champion, the barriers broke apart and flew into the road, knocking down Marc Sarreau (Groupama-FDJ), Eduard Prades (Movistar) and Damien Touzé (Cofidis), who all suffered injuries that will keep them out of competition.

Groenewegen himself fractured his collarbone, but in the aftermath he hardly noticed.

"Everything went so fast and the barriers were flying around. I crash, I'm on the floor, and others crash. It was mayhem," he said, his eyes tearing up.

Everyone who saw the incident was horrified by the devastation and a number of people from Jakobsen's team made rash statements out of emotion before circling the ranks and deleting their social media posts. Deceuninck-QuicksStep Manager Patrick Lefevere stood by comments that Groenewegen should face criminal charges for his actions.

"I think everyone is emotional, so am I," Groenewegen said, adding that even without the fractured collarbone he probably wouldn't want to ride again anytime soon.

"Even thinking about sprinting is something that is very far away now. I don't even want to think about riding my bike in the upcoming months. We'll see what's next. I do hope Fabio makes a full recovery and we can have sprints against each other in the future," he said, according to a translation on CyclingTips.

The team issued a statement on Friday, saying, "Team Jumbo-Visma stands for fair sportsmanship, within the rules. With his move Dylan broke a sports rule and that’s unacceptable. We have decided that Dylan will not start in a race until the judgment of the disciplinary committee to which the UCI has handed over the incident. For now, the health and recovery of Fabio prevails. Our thoughts go out to Fabio Jakobsen and the other people involved in the terrible crash in the Tour of Poland."

The team did condemn the harsh criticisms that Groenewegen has endured. "We will support Dylan and his family as a team to come through this (mentally) tough time for them. Some of the ways they are approached are reprehensible."