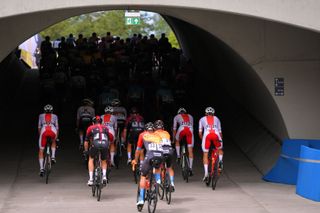 Jackobsen was the worst affected and was airlifted to hospital in a serious condition, as was a course-side official who was impacted by the crash.

Jumbo-Visma issued a statement on the crash, writing: "Our thoughts go out to Fabio Jakobsen and other people involved in today’s terrible crash in the Tour of Poland. Crashes like these should not happen.

"We offer our sincere apologies and we will discuss internally what has happened before we may make any further statement."

Groenewegen and Jakobsen clashed elbow-to-elbow just ahead of the finish line with the Deceuninck-Quickstep rider crashing into the course barriers, which then separated and flew across the road.

The force of the impact caused Groenewegen to fall with Philipsen unable to avoid the fallen Jumbo-Visma rider and the barricade causing the other riders to fall.

Sarreau and Touze were conscious and taken to hospital for further examinations, while Philipsen's team reported he had suffered only contusions.

Groupama-FDJ later reported that Sarreau, awarded second place on the stage, had suffered damage to the ligaments in his shoulder and would not continue in the race.

Cyclingnews will update this article as information becomes available.

We’ll let you know @FabioJakobsen as soon as we have some news from #TDP20. Let’s hope for the best.August 5, 2020

Every year the same silly downhill sprint in the @Tour_de_Pologne.Every year i ask myself why the organisation thinks it‘s a good idea. Bunch sprints are dangerous enough, you don’t need a downhill finish with 80kph!@cpacyclingAugust 5, 2020

Damien stayed conscious after the crash and is at the hospital for extra exams. We will give you some news when we’ll have a full dignostic.August 5, 2020

#TDP20 Thankfully just some abrasions for @JasperPhilipsen after a hard crash in the sprint. @sebasmolano_ also ok after an earlier fall.Our best wishes to the other riders involved 🙏 pic.twitter.com/KEuwCOL7i0August 5, 2020

This was not the way I hoped to reach the finish line. My biggest concern now is @FabioJakobsen. Thoughts are with him, @deceuninck_qst and his family! 🤞(📸 Cor Vos) pic.twitter.com/URk80OC8edAugust 5, 2020