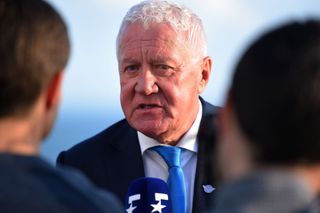 Patrick Lefevere has spoken out about the high-speed crash caused by Jumbo-Visma’s Dylan Groenewegen at the finish of stage 1 at the Tour de Pologne on Wednesday that resulted in his sprinter Fabio Jakobsen being airlifted to a hospital with life-threatening injuries. The Deceuninck-QuickStep owner expressed anger and dismay regarding Groenewegen’s line-deviation in the final metres of the sprint, calling the maneuver "criminal."

"They should throw him in prison," Lefevere posted to social media directly following the incident on Wednesday. In a report published in the Belga News Agency 24 hours later, Lefevere stood by his initial comments and confirmed that he has filed a formal complaint with the sport’s governing body, the UCI, and intends to file a complaint with local authorities in Poland.

“I am still very angry and stay behind those Twitter messages," Lefevere told the Belga News Agency. "It was a very dirty action by Groenewegen. You don't do that. We have already lodged a complaint with the UCI and will also do so to the police in Poland. We will not just let this pass."

The crash happened during the final metres of stage 1 where Groenewegen and Jakobsen were sprinting for the finish line in Katowice. Video footage shows Groenewegen deviate from his line towards the right-hand side of the road and Jakobsen crashing through the road-side barriers.

Groenewegen crossed the line first but also lost control of his bike and crashed just after the finish line. Half a dozen other riders went down in the incident, too, including Marc Sarreau (Groupama-FDJ), Jasper Philipsen (UAE Team Emirates), Damien Touze (Cofidis), and Eduard Prades (Movistar), who fractured his cervical vertebra. A road-side official was also impacted by the crash and taken to hospital with head injuries, and is now confirmed to be in stable condition.

Jakobsen suffered the worst of the crash and was treated immediately by the race medical services on-site. He was subsequently airlifted to a hospital in serious condition, and placed in a medically-induced coma in the intensive care unit at the hospital in Sosnowiec.

"It is a dirty action. You don't do that. Yesterday I saw the images on my phone," Lefevere said. "Meanwhile, I also saw it on a larger screen. I have seen the images delayed a few times. Actually, I've watched that sprint dozens of times. I have no understanding whatsoever for Groenewegen's action. A rider must remain on his line. He starts the sprint in the middle [of the road] and he can choose his line, of course. But after that, [Groenewegen] goes categorically to the right and even more to the right. He sees Fabio coming and then puts out an elbow again. He almost lies down on Fabio, which makes him lose his balance and fall against the barriers.

"There is no understanding this; this is an attack. He really rides Fabio into the [barriers]. I haven't been a sprinter, but I've been in cycling for years and I know a thing or two about racing. You can't do this. Fabio was waiting until the last 50 meters, without Groenewegen's action, he would have flown past him.

“So no, I will not take back my words from last night," Lefevere added. "A complaint has already been filed with the UCI and the team will do the same in Poland to the police."

Lefevere confirmed that he received a phone call from Jumbo-Visma team boss Richard Plugge last night. “I told him that I thought it was brave that he called me, but I also told him that I have no understanding whatsoever for Groenewegen's maneuver. I just can't do that."

The UCI released a statement following the crash saying it condemned the behaviour of Groenewegen. The severity of the incident prompted the sport's international governing body to immediately refer the matter to the Disciplinary Commission with a request to impose a sanction against Groenewegen. The commissaires' panel at the Tour de Pologne disqualified Groenewegen from the race and fined him 500CHF. Local authorities are now investigating the circumstances and causes of the incident, according to a tweet from the police department for Silesian Voivodeship.

Jumbo-Visma later released a public apology for the incident and confirmed that Groenewegen, who broke his collarbone in the crash, would be placed on inactive status until the UCI Disciplinary Commission make a decision. Groenewegen apologized after the incident on Thursday, saying "I hate what happened yesterday, I can't find the words to describe how sorry I am for Fabio and others who have been crashed or hit. At the moment, the health of Fabio is the most important thing. I think about him constantly."

Deceuninck-QuickStep released a medical update on Thursday morning confirming that Jakobsen remains in the intensive care unit and that he is in serious but stable condition after undergoing facial surgery lasting five and a half hours overnight. He remains in an induced coma, however, medics will begin to bring him out of a coma later in the day.

"His condition is serious. Fortunately, no vital organs have been hit, he is stable, but the next few hours are important. They are going to try to wake him up. All the bones in his face are broken. It's really bad," Lefevere said.

Lefevere has spent the last 24 hours making arrangement for Jakobsen’s family and girlfriend to travel to Poland to be with him at the hospital in Sosnowiec. He also arranged for the team’s sport psychologist, Michael Verschaeve, to travel to the race to be with Jakobsen’s teammates.

“I'm not working on that at the moment," Lefevere said when asked if he would travel to Poland. "I was busy with his family and how to get them to Poland as soon as possible. Yesterday I called Fabio's father. They already planned to get in the car and drive more than 1000km, but I immediately arranged a private flight for his parents and his girlfriend. They took off this morning in Rotterdam and are flying to Poland.

"Our team psychologist is also flying with them. He will assist our riders there. It is important that the boys there receive the necessary support. It is a huge blow for the team, it leaves its mark and you have to deal with it professionally with people who are trained for it."

Deceuninck-QuickStep team have opted to remain in the Tour de Pologne, which continues on Thursday with stage 2 from Opole to Zabrze, where they will ride for Remco Evenepoel as the overall contender.

“I have already consulted with sports director Klaas Lodewyck," Lefevere said. "The boys are just going to start and we are going to protect and position Remco so that he can play for the rankings in this Tour of Poland."