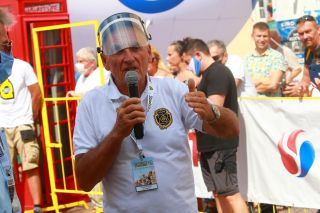 Tour de Pologne’s Race Director Czesław Lang has defended the safety of the stage 1 finish in Katowice, a downhill final straight that saw record high speeds in battling for the victory on Wednesday.

Touted for years by organizers and the Polish media as “the temple of sprint,” the venue saw a horrific crash during the final sprint on the opening stage that left Fabio Jakobsen in an induced coma, a race official unconscious, and several riders needing immediate medical treatment after the young Deceuninck-QuickStep sprinter broke through the barriers securing the finish line.

Jumbo Visma’s Dylan Groenewegen was held responsible for the incident, with the UCI laying the blame for the crash on the Dutchman’s shoulders. He was disqualified from the race and fined, while the win was awarded to Jakobsen.

Jakobsen has received medical attention on site and was transported to a specialist hospital where doctors were able to stabilise him and then conduct the first surgery. His condition was described as stable and no brain or spinal cord injuries were detected, according to Polish media reports and his team's statement.

The UCI and the organizers have come under fire for organising a downhill sprint in the final of a technical lap. Some riders, including Simon Geschke, Fabio Sabatini and Jose Joaquin Rojas, took to Twitter to criticise the downhill finish, while others questioned the safety of the course.

Former sprinter Robbie McEwen told Cyclingnews that he was disturbed by just how easy Jakobsen had broken through the barriers. “That’s really poor planning, not just from the organisers themselves but the UCI, and they have to take responsibility for that,” he said.

In discussing the stage finish, Lang denied that the route has been recklessly designed.

“We start off on one side of the road, it gets slightly uphill, the bunch stretches, and then we have a run-in to the finish, slightly downhill. They go pretty fast there but have you ever seen a complete peloton at the finish? It’s always stretched, it’s not a crowded sprint. It’s well prepared, riders go through this section three or four times so they can see it in advance,” he told Cyclingnews.

“This happened not because of a badly prepared finish or because something was missing… this was a foul. I can understand sprinters getting in each other’s way, it happens sometimes. But here [Groenewegen] had an elbow out and drove him into the barriers,” Lang added.

“Sprinters have a specific mindset. They need to win, they have tunnel vision. It’s how it works, they take risks and accept them, otherwise they won’t win, they won’t bet everything on one card. There is no way to completely secure the racing.”

The technical 16.3km loop in Katowice city centre has been a regular feature in Tour de Pologne’s program with the finish line situated on a downhill leg of Aleja Korfantego, a major city avenue, near the Spodek multipurpose arena.

Major crowds attended the finish area in the past, however, this year due to the sanitary protocols in place, there were fortunately no spectators along the barriers that were set flying when Jakobsen crashed, with pieces of the fence landing on the road, among the riders.

Riders on Twitter were not the only ones protesting post-factum. The CPA’s president Gianni Bugno penned a letter to the UCI president and race organizers, asking for an investigation into the compliance with safety measures mandated by the regulations. The letter further urges the UCI to answer CPA’s call for a universal and pre-approved standard of barriers in the finish areas and key points of the race and raises questions as to the safety of downhill finishes in bunch sprint scenarios.

“This is a selective finale but it’s not ill-designed, it’s not that we just let them sprint downhill, as some, including Geschke, suggested. It’s a selective, stretched out and fast finale. And we never had any crashes there,” Lang pointed out. “The barriers are placed at an angle, so that their legs don’t protrude. They are fixed and clipped together. We also use boards, not banners, since there were cases of those getting into the wheels and causing crashes. Everything was prepared as safely as it could have been,” he explained.

Lang, who feared the worst upon seeing the crash, thinks the crash could have been much worse with spectators present.

Under the Polish Penal Code, unintentional causing grievous bodily harm carries up to three years in prison, although it is not clear whether charges will be brought up as the incident occurred during a sporting event.