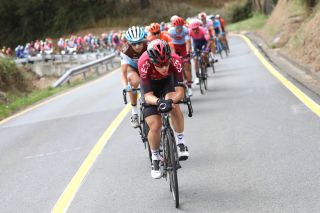 UAE Team Emirates announced the signing of climber David de la Cruz for the 2020 and 2021 seasons. The Spaniard will move across from Team Ineos, where he has acted as a key climbing domestique in the Grand Tours, helping Chris Froome to victory in the 2018 Giro d'Italia and 2017 Vuelta a España.

De la Cruz has a stage win in the 2016 Vuelta a Espana and two stages of Paris-Nice on his palmares as well as two third-place finishes in the Vuelta a Burgos general classification. He joins other newcomers Joe Dombrowski (EF Education First), Davide Formolo (Bora-Hansgrohe) and young riders Brandon McNulty (Rally UHC), Mikkel Bjerg (Axeon Hagens Berman) and Alessandro Covi (Colpack) in the team.

Team Manager Joxean Matxin has been steadily building UAE Team Emirates' Grand Tour potential, bringing on Max Richeze from Deceuninck-Quickstep to boost Fernado Gaviria's sprint train, and De la Cruz is another facet of that initiative. "David is a rider who has the right experience to fully exploit his talent and immediately be a reliable part of our team in key races. His climbing talent, combined with his strength in time trials, has led him to win stages in top-level races and to wear leaders jerseys," Matxin said.

De la Cruz caled the proposal "everything I needed from a cycling point of view".

"The UAE Team Emirates project to become a reference within cycling is ambitious and it has solid plans in place to work towards this goal. In the next two seasons I hope to contribute to this project by being able to perform at my highest level. I really want to give my best and I'm sure that at UAE Team Emirates I'll be in the right place to do that."

His departure from Team Ineos comes on the heels of news that Spaniard Andrey Amador broke his contract with Movistar to move across to the British squad.

Spaniard Jonathan Castroviejo will remain with Team Ineos for the next two seasons, renewing his contract with the British WorldTour squad. The 32-year-old has been a part of the team for its past two Tour de France overall victories.

"I'm really happy to be staying with the Team. I've enjoyed two brilliant years here and to be a part of two Tour de France winning teams has been special," Castroviejo said.

"I wanted to take a next step when I joined the Team and I feel like I have done that. Now I'm really settled here. It has been a great environment for me to keep improving as a cyclist and I'm looking forward to playing my part alongside our exciting group of young riders."

The five-time Spanish time trial champion played a key role in controlling stages for the team, and his coach Xabi Artetxe said he's exceeded expectations during his time with Ineos.

"We knew what type of rider Jonathan was before we signed him, but I think I speak for everyone on the team when I say that Castro has surpassed our expectations. He is one of the most professional bike riders I've worked with and he has been exemplary in his two years with us," Artetxe said.

"He has enhanced his reputation as one of the most consistent time triallists in the world and he has quickly become a pivotal member of our Tour de France team. It's great that Castro will be staying for another two years."

The Mitchelton-Scott team has signed Alexandr Konychev, the son of retired pro Dmitri Konychev, as a neo-pro. Konychev claimed his first win as an U23 rider in the L'Etoile d'Or this season, and impressed directeur sportif Matt White with his performance in the European Championships.

"Alex is a big, strong lad. He will be in our Classics group and what we see in him is the potential to grow. He rides very well positioning wise and he will work in well with that Classics and sprint group which is obviously a very young group in our team," White said.

"He won a Nations Cup under-23 race this year and besides that, which is no easy feat against the best under-23 riders in the world, he has had some consistent results.

"The performance that really stood out was at the European Championships when he was away with a Norwegian rider with 45km to go with 35-40seconds. The gap stayed the same for another 20km and at 15km to go he has attacked and rode off the front. The bunch was in full chase and only caught him with one kilometre to go. I knew then that he was strong."

Konychev is the team's third neo-pro after the signing of Kaden Groves and Barnabas Peak, and said he signed on the recommendation of Italian Edoardo Affini.

"For me, to step up in a WorldTour team is a dream that becomes true. I still think I have to realise really what is happening but I'm super happy and can't wait to start the new season," Konychev said.

"I think I still have to discover myself better as a rider as it's only been five years that I'm on the bike, but I'm quite fast in reduced sprints. I also like the time trial and I love to attack."

Norwegian riders Emilie Moberg and Elise Marie Olsen – both from the same hometown of Halden – will join the Drops Cycling Team from next season, with Moberg joining from Danish squad Team Virtu and Olsen making the step up to the senior level for the first time.

"I think as a rider and a person, the team is a really good fit for me. I'm excited about joining a non-Scandinavian team, but, at the same time, this is a team with a similar mentality," said 28-year-old Moberg, who rode for Norwegian team Hitec for seven seasons before joining Virtu in 2018, with the latter team set to close down at the end of this year.

"I like the fighting spirit within the Drops team, and for next year we'll have a strong group of riders, a good race programme that fits me well, and I'm excited about taking on a new role in a new team," she said in a press release.

"I really like that it will be a good mix of experienced riders and young riders on the 2020 team, because I think both ways we can benefit from each other's perspectives," continued Moberg, who won a stage of the Tour of Uppsala in Sweden in May.

"And, of course, I'm very proud that we are two Norwegian riders, from the same town, on the same UCI team next year," she said.

Eighteen-year-old Olsen recently represented her nation in the junior women's road race at the World Championships in Yorkshire, finishing 47th, and will make the step up to senior level for next season.

"I'm really proud and delighted to get the opportunity to join Drops," said Olsen. "The team appears solid and serious, established on a friendly and safe environment.

"When also having Emilie as a mentor in the initial phase, I can't imagine a better way for me to move from junior level to my first year in elite women. I must say that it's almost a bit surreal that my first year as a senior will be together with my old neighbour and idol Emilie," she said.

"I am convinced that I will learn and experience a lot in the upcoming year, and I will do my very best to contribute to the team on and off the bike," added Olsen. "I promise that I'll be super motivated to train hard with high quality this winter, so that I can be best prepared when the 2020 season kicks off."