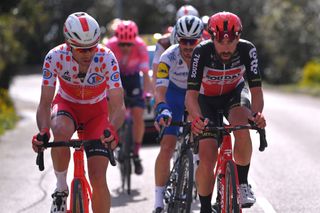 Lotto Soudal's breakaway specialist Thomas De Gendt rounded out Saturday's final stage of Paris-Nice – and what looks like it could be the last major race for some time – with a customary day out in the break, the 'Final Breakaway' as he termed it in a Twitter post.

The Belgian struck out during the opening 20km of the stage, attacking with Julian Alaphilippe (Deceuninck-QuickStep) and mountain classification leader Nicolas Edet (Cofidis), among others.

The group worked together up until the final climb of the day, the 16km first category summit finish at Valdelore La Colmaine. As the group fractured, he and Alaphilippe proved strongest, but with 10km to go De Gendt was alone, fending off the GC group 1:30 down the road.

In the end, the day didn't end with a win for De Gendt, as it did in Saint-Étienne last July. The 33-year-old was caught and passed by eventual stage winner Nairo Quintana (Arkéa-Samsic) three kilometres from the line, ending up in 11th, 1:48 down, at the finish.

Bardet frustrated with riding on at Paris-Nice during coronavirus pandemic

"I could see from his face that Alaphilippe was à bloc," he said in a team press release. "I didn't want to take any chances and left him behind. And yet I didn't believe in the victory anymore. The energy was draining.

"In the front group, Alberto Bettiol and Aurélien Paret-Peintre didn't cooperate and Anthony Perez was of no help going uphill. In the end, three of us did the work and after 150km in front I had some attacks left.

"I also knew I had one-minute lead at 3km from the finish. I didn't have it, and then Quintana came. So, it was over and out, but I return to Belgium with a nice feeling. I'm curious how long it lasts."

And he said afterwards that he was glad to have raced the curtailed Race to the Sun, despite the chaotic situation of the past week as the Covid-19 coronavirus pandemic saw countless races cancelled.

"I'm really glad we were able to ride Paris-Nice," he said in a team press release. "Otherwise we would have trained so hard for nothing.

"It's also a great race, even with a smaller peloton this year. Honestly, the race lost some of its shine after a number of top teams dropped out, but there really was a battle every day. Just look at the stage Tiesj Benoot won [stage 6], or also the final stage where he fought for overall victory."

Lotto Soudal were one of just 17 teams to start the race after seven WorldTour teams withdrew before the start. With Bahrain-McLaren and Israel Start-Up Nation pulling out mid-race too, even eight-man team and two additional invitees couldn't stop the race concluding with a lowly 62 finishers.

"Of course, I have every sympathy for the withdrawal of those teams," De Gendt said. "Each team made their choice and each team respected the choices of others. If our team doctors had decided we weren't allowed to start, we wouldn't have done so.

"During the race, we followed all the instruction and in the end, we only had close contact with people from our own team, so the chance of infection was minimal. Let's hope that the current situation clears up as soon as possible and that we can race again in one- or two-months' time."

Two months seems like an optimistic timeframe at the moment, though, with May's premier event, the Giro d'Italia, being forced to announce a postponement on Friday. As of Saturday afternoon, the next WorldTour races are set to be the Tour of Flanders and Itzulia Basque Country, which run on April 5 and 6-11.

Flanders' prognosis looks bleak, however, and with coronavirus cases in the Basque provinces of Araba, Gipuzkoa and Bizkaia totalling over 500 on Friday, the chances of racing there don't look positive either.

For De Gendt, and for every other pro rider, the problem with the race cancellations extends to the question of what exactly they will be training and peaking for in the coming months.

"That's something we need to discuss with our coaches," he said. "The most difficult thing is what are we working towards? For mid-May? The Belgian Championships [in June]? The Tour de France?

"It's a bit stupid to peak at a certain date when there are no prospects. I think the Tour will be able to go on. That's what I'm aiming for."

If you don’t shoot, you’ll always miss. Gave it my all today for myself, for my family, for my team, for the fans and for cycling. #TheFinalBreakaway pic.twitter.com/KcL6F7zz2TMarch 14, 2020