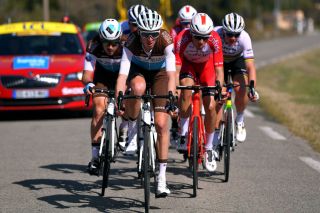 Paris-Nice is set to continue on for one last stage on Saturday but riders are becoming more and more concerned about the spread of the coronavirus and more frustrated with racing on, with Romain Bardet suggesting "Nothing really makes sense anymore."

The AG2R La Mondiale rider went on the attack during stage 6, mainly to escape the reality of Paris-Nice rolling on while the coronavirus pandemic continues and whole countries, including France, shut down to limit the spread of the virus.

Race organiser ASO confirmed Paris-Nice would end after Saturday's mountain stage from Nice to Valdeblore La Colmiane but there was growing frustration amongst teams and riders.

Bahrain-McLaren pull out of Paris-Nice over coronavirus concerns

"When nothing really makes sense anymore, you might as well get caught up in the ambient madness and do the things you like to do," Bardet said after the stage to French media.

"I didn't understand why the race went on today. We seem out of place on a bike when everyone is making efforts to stem the spread of the virus."

Teams reportedly voted 11-5 to continue racing at Paris-Nice despite the coronavirus crisis but Bahrain McLaren decided to head home and put the safety and health of their riders and staff first. At the finish in Apt, Israel Start-up Nation also decided to quit the race and head home.

"I deplore the lack of unity in the peloton: some are gone, others are not, we'll end up being maybe 30 riders," Bardet said.

"What's the sense of it all, especially towards the rest of the population? We do our little race as if nothing is happening. It's all very strange."

Bardet made it clear he is not interested in thinking about the postponement of the Giro d'Italia or a new race calendar. He understands the wider issues.

"Nothing surprises me in 2020. I'm especially worried about the general health situation," he said.

"Maybe in a few days we will be able to draw up a new calendar, but we don't yet know how the pandemic will evolve and we could still have to do a lot to fight it in the coming weeks. That's what worries me, the idea that the worst is certainly still to come.

"Should I ride the Tour? I can’t say that, who knows."