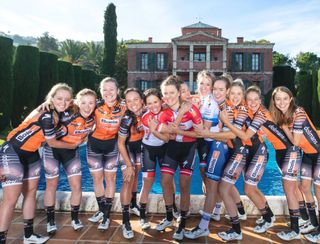 Boels Dolmans manager Danny Stam has set an April deadline to find new financial backers after Boels Rental and Dolmans announced they would end sponsorship of the team this year.

Stam told Cyclingnews that he is in negotiations with potential sponsors and confirmed that he is not currently in discussion with men's WorldTour team Jumbo-Visma about that program's planned women’s team for 2021.

"We are working very hard at the moment to realise our future and we are in some negotiations with potential sponsors," Stam told Cyclingnews.

"Of course we have a deadline in our head; we believe if we don’t have something clear by the end of April we will be too late to keep a good level [team]. But I don’t think we need to wait that long."

Asked if he was willing to restructure the team into a small programme if he were unable to find new sponsors, Stam said, "I’m still confident but if we don’t have a replacement, we close down [because] smaller will not work."

Boels Dolmans have been the most successful women's team in recent history. They have been the number one women's team in the world since 2015 and have won the elite women's road race World Championships for four consecutive years: Lizzie Deignan (2015), Amalie Dideriksen (2016), Chantal Blaak (2017) and Anna van der Breggen (2018).

Despite such success, the team announced that co-title sponsors Boels Rental and Dolmans would not renew their contracts with the team beyond 2020. The announcement was made at the 2019 UCI Road World Championships in Yorkshire, where company owners expressed their gratitude to the team for their growth and achievements in women’s cycling over the past five years.

There are currently eight WorldTour teams that have both men’s and women’s outfits, but Stam told Cyclingnews that he would like the team to remain independent of a men’s WorldTour team.

Boels Dolmans did not secure the new top-tier WorldTeam status this year because it could not provide a four-year sponsor guarantee. However, Stam is confident that the team will find new sponsors and he intends to continue to build the program in future.

"We still feel the same," Stam told Cyclingnews regarding not wanting to partner with a men's team. "Of course it’s nice when you can relay on a men’s team, but we prefer to stay independent and focus only on a women’s team, and give them the full priority to focus on their sport."

According to Bicycling.nl, however, men’s WorldTour team Jumbo-Visma is considering adding a women's programme to their line-up next year. Team manager Richard Plugge told the magazine that they are looking into the idea and that opportunities could open up pending the outcome of Boels Dolmans search for sponsorship.

Plugge noted that if Boels Dolmans could not replace their sponsors, it could force the team to release top riders such as former world champions van der Breggen and Blaak. Plugge believes that Jumbo-Visma has the resources to build its own programme.

Stam told Cyclingnews that he has not been in contact with Jumbo-Visma’s organisation for a potential merge or a take-over of Boels Dolmans, but that he would be interested in listening to their ideas.

"We are open to listening but for now we have our own interests," Stam said.

Asked if he was concerned that he might lose some of his top riders to a potential new Jumbo-Visma women's team, Stam said, "In this world you always have riders that come and go, even when you have a longterm future."