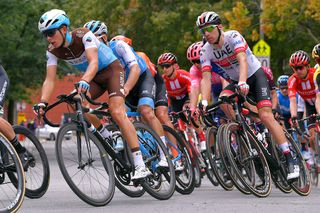 As looked likely, given his excellent performances at the two one-day Canadian WorldTour races last week, AG2R La Mondiale's Benoît Cosnefroy has been picked as the eighth and final member of France's elite men's road-race squad to support Julian Alaphilippe (Deceuninck-QuickStep) at the 2019 World Championships.

Cosnefroy was left frustrated by Alaphilippe's inability to contribute more to the two-man move, but was diplomatic about those frustrations when talking to the press after the race.

"I wanted Julian to take more turns, but he was à fond – flat out. That's what he told me at the finish," said Cosnefroy after the race. "I'm disappointed. It would have been nice to have had a French one-two here in Montreal with Julian. It would have been beautiful to be on the podium with him. Even though we're not on the same team, we're both French, and I've known Julian for a long time."

However, his performances in Canada – plus that diplomacy, perhaps – has seen Cosnefroy chosen by France's national-team selector, former pro Thomas Voeckler, to complete the squad for the Worlds road race, which takes place in Yorkshire on Sunday, September 29.

"The main thing that prompted me to put my trust in Benoît was the consistency he's managed to maintain in the wake of his superb August," said Voeckler in a French cycling federation (FFC) press release, referring to Cosnefroy's win at La Poly Normande and his stage victory and overall victory at the Tour du Limousin on the back of his first Tour de France.

"In addition, despite his youth, he really knows how to read a race, and how to gauge his efforts," Voeckler said. "That ability is essential for a race like the Worlds road race, where riders don't get to use a radio.

"The physical advantages of having ridden the Tour, too, should allow him to play a key role in the race. It's for those reasons that I decided to include Benoît on the squad to ride alongside Julian in Yorkshire," he said.

It makes Cosnefroy the second AG2R La Mondiale in the road-race squad, alongside Tony Gallopin, while the French WorldTour team's Pierre Latour will represent France in the elite men's individual time trial on September 25.