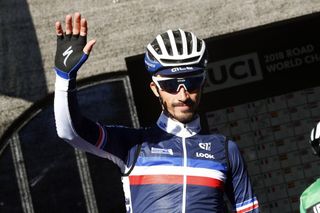 Alaphilippe sacrificing races for freshness ahead of Yorkshire Worlds

Julian Alaphilippe: Everyone expected me to win the Worlds

Julian Alaphilippe will be supported by a strong cast of riders on the French national team when he lines up for the UCI Road World Championships road race in Yorkshire, in the UK, on September 29.

The eight-man team that will be headed up by this year's winner of Milan-San Remo, Fleche Wallonne and Strade Bianche also includes Tony Gallopin (AG2R La Mondiale) and Groupama-FDJ stalwart Anthony Roux.

Not that surprisingly, Alaphilippe has the luxury of his two compatriots from his Deceuninck-QuickStep trade team along with him for the ride in Yorkshire – Florian Sénéchal and Rémi Cavagna – while the rest of the team is made up of Julian Bernard (Trek-Segafredo), Christophe Laporte (Cofidis) and one more yet-to-be-named rider, who French national team manager Thomas Voeckler said would be picked following the GP Cycliste de Québec and the GP Cycliste de Montréal WorldTour races in Canada next week, both of which Alaphilippe will also ride.

"Once Julian let me know that he'd recovered from the Tour de France, I had the green light to select him for the Worlds road race. Knowing that he was ready, I sat down with him and his coach to finalise the rest of the squad, which seemed like a logical thing to do as I wanted a group that was capable of riding 100 per cent for him, and one that he was happy with – and it was a unanimous decision on who we've gone for for these Worlds," said Voeckler of the team selection on the French cycling federation's (FFC) website.

"Julian has already put so much effort into this season that winning the Worlds would simply be a bonus in what has been a fantastic 2019 for him. But he is without doubt our best chance of success," continued Voeckler, who himself only retired after the 2017 Tour de France.

"I needed riders who would be happy to work for him, and luckily we have a wealth of options in a cycling nation like France. He needs teammates who can work from the beginning of the race all the way through to the finale."

With regards to the omission of last year's silver medallist Romain Bardet, Thibaut Pinot and Warren Barguil, Voeckler reiterated that it was a course more suited to a rider like Alaphilippe, and that France's pure-climbing stars would have their chances elsewhere.

"All three of those riders know that they'll have the opportunity at events next year such as the Olympic road race in Tokyo, the Worlds road race in Martigny, in Switzerland, and the European Championships in Italy," he said, picking out three much hillier championship races in which the likes of Bardet, Pinot and Barguil are likely to represent their nation.

"We wanted riders around Julian who are well established in the international peloton, who are well-respected by their opponents and who know how to adopt their individual roles, as this is a very technical course," explained Voeckler.

"The first 110 kilometres of the race are going to be a real battle for position, in addition to the wearing-down process of the race distance. Three hundred kilometres [284.5km], coming at the end of the season, is not to be sniffed at, so you need to be able to knuckle down against what could also be challenging weather conditions."

Voeckler acknowledged that while Alaphilippe will start the race as one of the clear favourites, he doesn't want to put any undue pressure on the 27-year-old's shoulders.

"We want to win, of course, but this is still sport, and only one rider can stand on the top of the podium at the end of the day," he said.

"We're not going for a place in the top 10, or to get three riders in the top 20, though," said Voeckler. "We're hoping to win following a great team performance and by putting our plan into action. But this race isn't life or death, or a career-making or breaking, for Julian."