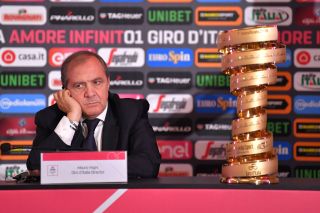 Giro d’Italia director Mauro Vegni has suggested that the 2020 edition of the race could be held on an alternative date if the Covid-19 coronavirus pandemic prevents it from getting underway in Budapest on May 9 as planned.

RCS Sport has already been obliged to postpone Milan-San Remo, Tirreno-Adriatico, Strade Bianche and the Giro di Sicilia due to the spread of Covid-19 in Italy. Earlier this week, the entire country was placed in lockdown, with all sporting events and public gatherings prohibited until at least April 3.

"We're trying to save the May 9 start of the Giro d'Italia in Hungary but another date is possible," Vegni told the Adnkronos news agency on Thursday.

Hungary declared a state of emergency on Wednesday to deal with the coronavirus outbreak as the number of confirmed cases there reached 13, banning large gatherings and banning travel to the country from Italy, China, South Korea and Iran. The 2020 Giro d'Italia is slated to feature three stages on Hungarian roads before the race caravan travels onwards to Sicily for stage 4.

"We're speaking to the Hungarian authorities to understand what's happening there. We've got to understand that they are, like us, in a battle to fight the virus," Vegni said. "Everything is up in the air, so for now we're going to wait until April 3."

Although Paris-Nice has gone ahead, a large portion of the WorldTour calendar looks set to fall by the wayside in the coming weeks. A number of races across Europe have been cancelled, including the Volta a Catalunya, while the cobbled Classics are in extreme doubt after the Flemish government announced the suspension of sporting events up to and including March 31.

"We're going to wait for the end of the month to see what happens. I think there will be a complete review of all the year, for all activities. It's a difficult moment," Vegni said.

Other sports have also been affected by the spread of coronavirus, and football’s governing body in Europe, UEFA, will hold an emergency meeting next week to discuss the growing backlog of Champions League fixtures and the prospect of postponing June’s Euro 2020 tournament until 2021. It also remains to be seen if the Tokyo 2020 Olympics will be affected by the Covid-19 pandemic.

"We've also got to understand what UEFA will do about the Euro 2020 football tournament," Vegni said. "The issue of dates for all sport is a huge puzzle that is difficult to work out."