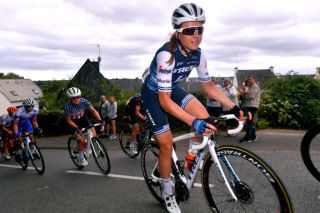 For Audrey Cordon-Ragot (Trek-Segafredo), the GP de Plouay is a home race. As the finish line in Plouay is less than 70 km from her home in Loudéac, the Breton rider was very motivated at the start and racing well.

Cordon-Ragot was part of a strong group of 11 riders that got away on the Côte du Moulin with 59 km to go, holding a gap of up to 30 seconds over the peloton. On the Ty Marrec climb, more riders bridged to the front, and the group stopped to work.

One lap later, Cordon-Ragot again made the selection on the Côte du Moulin. This time, the front group consisted of 19 riders, but the peloton was never far behind and caught them five kilometres later.

On the penultimate lap, the 29-year-old followed moves by Lucy Kennedy (Mitchelton-Scott) on the Côte de Ty Marrec and Eri Yonamine (Alé Cipollini) on the flat after the crest of the climb. Yonamine’s attack briefly led to a group of seven breaking away, and when the gap was closed again, Cordon-Ragot counterattacked herself with 16 km to go.

She got a gap and kept going, but eventually the peloton started chasing with Katie Hall (Boels Dolmans) at the front, and Cordon-Ragot was reeled in again. When eventual race winner Anna van der Breggen (Boels Dolmans) had attacked on the final lap, Cordon-Ragot was one of the riders chasing hard in the peloton behind. This was in support of US champion Ruth Winder who the team backed for a result.

Van der Breggen held on to take a solo victory, and Winder finished in ninth place. Cordon-Ragot had accepted the decision, but after the race, she expressed frustration at not being given her team’s full support.

"I never felt so good in this race before," Cordon-Ragot told French newspaper Le Télégramme. “I tested myself on the Cadoudal climb during the week, and the wattage numbers were excellent. I said that I had great legs, but I didn’t get the team’s confidence. That’s the way big teams work.

"So far, I have always accepted it, but I will say some things at the debriefing. I think it’s time I stand up for myself a bit more."