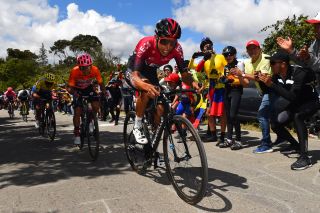 Egan Bernal, Nairo Quintana, Rigoberto Uran and other Colombian riders' hopes of returning to Europe to ride the Tour de France depend on them securing special dispensation from the Colombian government after the South American country joined its neighbours in grounding all international passenger flights until August 31 due to the COVID-19 pandemic.

The Tour de France is due to start in Nice on August 29, with other WorldTour races returning starting with Strade Bianche in Italy on August 1. Colombian riders were expected to travel to Europe sometime in July after training at home since the outbreak of the COVID-19 pandemic in March. They were ready to serve some kind of quarantine and screening in Europe but now they must first secure permission to leave Colombia.

Giuseppe Acquadro, agent to many of the Colombian and South American riders, was concerned about the travel ban but he told Cyclingnews he was optimistic they can secure special permission to travel to Europe, perhaps by travelling together on a private jet.

"Let's hope they will be given special permission to travel. I think they will be. They're athletes but racing in Europe is also their work, so it's important to them," Acquadro said.

Cyclingnews understands that Team Ineos is aware of the problem and are also working to ensure Bernal and their other riders can travel from South America to line up for the Tour de France and other races in Europe.

Colombia President Iván Duque extended the country's state of emergency until August 31 during an announcement to the nation on Wednesday. Statistics show Colombia has suffered over 17,000 cases of the COVID-19 coronavirus and 630 people have died. The nation has begun a gradual end to a strict lockdown, with riders allowed to train outdoors since late April.

However, the Minister of Transportation Angela Maria Orozco cancelled all national and international flights in the country until August 31. Land borders will also be closed and all national transport is suspended until further notice.

Latin America has imposed stricter travel restrictions than most regions to fight the COVID-19 coronavirus. Argentina, Peru, Ecuador, El Salvador and Panama have also grounded all flights and repeatedly extended those bans as the disease has spread.

"Until August 31 we do not expect to resume international air travel or to reopen land borders," Orozco said in an interview with Blu Radio on Wednesday according to the Reuters news agency.

"The restriction on international air transport goes hand in hand with the health emergency, that is, until August 31. Until that date the restoration of international flights are not expected."

Bernal became the first Colombian to win the Tour de France in 2019 and has made it clear in recent weeks that he wants lead Team Ineos at this year's Tour de France, his comments igniting a leadership debate, with Geraint Thomas and Chris Froome also saying they want to win the 2020 Tour de France.

Bernal was declared a national hero when he returned to Colombia after winning the 2019 Tour de France. Acquadro believes the Colombian government will take heed of that.

"The Colombian government knows that Egan, Nairo, Rigo and the other riders competing at the Tour de France and in Europe is good for the morale of the country during the COVID-19 problems, so I think they'll given them special dispensation to travel," Acquadro told Cyclingnews.

"Rigoberto Uran has a great relationship with the President and the Minister of Sport, I'm sure he can help find a solution. The riders might need to undergo tests to show they don't have the virus and travel all together but that's not a problem."

According to the Zikoland website, 22 Colombian riders compete in the men's WorldTour, with a total of 111 professional riders registered with the UCI. Most are believed to be currently in Colombia, while Giro d'Italia winner Richard Carapaz is in nearby Ecuador