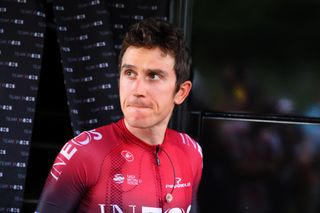 Geraint Thomas travelled from his home in Wales to his base in Monaco on Monday, in order to be able to ramp up his training for the rescheduled Tour de France.

Since the COVID-19 pandemic forced the suspension of the season, the 2018 Tour de France champion had been in his native Wales, where lockdown conditions are stricter than the rest of the UK.

Guidelines for cycling state riders can go out once a day but must ride locally and not for a long period of time. Thomas has ridden outdoors sparingly but has made use of his home trainer, doing three 12-hour rides on consecutive days to raise £375,000 for the national health service.

On Monday, Thomas posted a photo on his social media accounts of himself on a plane, wearing a face mask, with the caption: "Boarded and ready to go."

He is heading to Monaco, where he and many other pro cyclists live and train during the season. Outdoor exercise has been allowed in the small principality since May 4 but is also permitted in neighbouring France from Monday, meaning Thomas can train in the hills of Nice and beyond.

"I'm going back to France on Monday, so will be back out there and can train on the roads there, at the moment anyway," At the weekend, he explained in an Q&A with online retailer Wiggle.

"That's what the French government is saying, so I'm looking forward to that."

In the new 2020 calendar, unveiled by the UCI last week, the Tour de France will remain Thomas' primary objective. With the race starting in Nice on August 29, Thomas is confident he has the time to find the form that took him to the title in 2018 and the podium in 2019.

"At the moment, it's been more about maintenance, keeping a bit of fitness and trying not to put on a load of weight. Everyone is locked in their houses and you can get into a bit of boredom eating and it's easy to put on weight, especially when you're not training as hard as normal," he said.

"Once I go out to France, it's still 15 weeks until the Tour, so it's more about staying mentally fresh to get going and dig in over the next three or four months. Especially when I get back out there, it will be full-on knuckling down again."