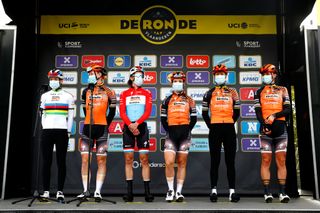 Boels Dolmans entered the women’s Tour of Flanders with an exceptionally strong team and came out victorious – but it was neither current world champion Anna van der Breggen nor Jolien D’hoore, winner of Gent-Wevelgem the weekend before and one of the pre-race favourites, who won the race for the orange-clad squad.

Instead, Chantal van den Broek-Blaak and Amy Pieters finished off their teammates’ work with a 1-2 as Van den Broek-Blaak went solo on the Oude Kwaremont and held off the chasing group from which Pieters then won the sprint for second place.

After no Boels Dolmans rider finished on the 2019 podium of the Tour of Flanders, the team’s riders were under some pressure to perform, particularly as it was also one of the last races for perennial sponsors Boels Rental and Dolmans Landscaping Group. In the absence of last year’s winner Marta Bastianelli (Alé BTC Ljubljana) whose team is in quarantine after a Covid-19 positive, the bib number 1 was given to world champion and 2018 winner Anna van der Breggen.

Four teams out of Women's Tour of Flanders, including defending champion Bastianelli

Marianne Vos pulls out of Tour of Flanders

But Van der Breggen showed herself at the front of the peloton very early, pushing hard on the climbs of Kanarieberg and Taaienberg to make the race hard. In her post-race interview, Van den Broek-Blaak explained that the team had agreed to have the world champion support her team as the most deluxe domestique imaginable: “Anna said yesterday in the meeting, ‘I am here for you’. With Jolien, Amy and myself, we had a strong block of riders, then you know that you have to win.”

Van den Broek-Blaak’s winning move on the Oude Kwaremont was not her first attack. On the Kruisberg-Hotond, she made two attempts to get away but was closed down both times. The second time, Annemiek van Vleuten (Mitchelton-Scott) counterattacked and broke free.

“When Annemiek was caught again, I was tired,” Van den Broek-Blaak said. “But everyone else was tired, too. It was not our plan for me to try once again on the Kwaremont, but I thought, maybe this is the moment, and we were still there with four riders, so we could play our cards.”

That Van Vleuten was reeled in at all was due to Van der Breggen chasing her down solo. When she had caught up with Van Vleuten after a hard chase, Van der Breggen refused to take any turns. Faced with the prospect of dragging the world champion around the race with the ever-present danger of a sneak attack, Van Vleuten let up, and the two rivals shared a laugh as the group behind caught up, the decision postponed.

Van den Broek-Blaak’s next attack, on the Oude Kwaremont, turned out to be the decisive move. In her twelfth Tour of Flanders participation and after six previous top-tens including two third places, Van den Broek-Blaak who turns 31 on 22 October could give herself an early birthday present, winning the race that had eluded her for so long.

For Amy Pieters, finishing as runner-up behind her teammate was a repeat of the 2018 edition when she took second place behind Van der Breggen. She was happy for Van den Broek-Blaak and underlined that it was a team victory.

“When you can finish second behind your own teammate, it is just like winning,” Pieters was happy with her result. “Every race we win, we win together. It is great that everyone gets a chance to stand on the top step of the podium. We all had our chances today, and it was great that Chantal got away. Jolien was very important today. On paper, she is the fastest sprinter in the peloton. It’s a pity she couldn’t stay with us on the Oude Kwaremont. The most important thing is that one of us wins, and we made that happen.”