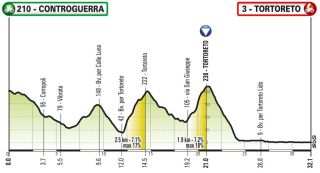 Astana and Trek-Segafredo Women were the winners of the opening stage of the Giro d'Italia Virtual that kicked off on Sunday.

The Astana Pro Team of Alexey Lutsenko and Davide Martinelli and Trek-Segafredo Women's team of Elisa Longo Borghini and Lizzie Deignan had the fastest combined times over the 32km course in their respective categories.

Stage 1 of the Giro d'Italia Virtual was a section of the 2020 Giro d'Italia stage 10 route from Controguerra to Tortoreto with 480m of elevation gain.

Astana Pro Team had the fastest combined time of 1:35:04, beating runner-up Italian National Team of Elia Viviani and Samuele Zoccarato by 6:46. Third place went to Bahrain McLaren team of Fred Wright and Grega Bole that now sit at 9:40 back.

Lutsenko had the fastest individual time of 44:41.

In the women's Pink Race, Trek-Segafredo's team of Longo Borghini and Deignan had a combined time of 2:10:04. They finished 4:18 ahead of runner-up Italian national team of Maria Giulia Confalonieri and Arianna Fidanza, while Movistar Team finished in third at 11:03 back.

Longo Borghini had the fastest individual time of 1:1:01:02.

Viviani is the current European Champion and races for the trade team Cofidis commented on the Giro d'Italia Virtual taking place during the COVID-19 crisis and current lockdown in Italy.

"This whole initiative really is great," he said. "At a time like this, it’s good to see the sport of cycling finding new ways to give something back to the fans while also raising funds for the Italian Red Cross. As an athlete, I’m more than happy to participate. It’s a genuine challenge for a rider as you’re pedalling an accurate simulation of climbs that truly do feel like the real thing. It’s an experience, I’d recommend it."

Giro d'Italia Virtual is offering seven stages between April 18 and May 10. The event allows riders to compete over each stage on their own time - they must finish and upload their ride within a three-day window for each stage.

Stage 1 will remain open until April 21.

Registration is divided into four separate categories – Amateur, Legends, Pro and Women – each with their own separate general classification.

Maglia Rosa jerseys are awarded to the top finishers for men and women and white jerseys (or Maglia Bianca) for the best young riders, and there will also be a teams classification for the pros and a Maglia Garmin for the rider with the top speed on each stage.

The Giro d’Italia Virtual will raise vital funds for the COVID-19 response for the Italian Red Cross in partnership with Rete del Dono.