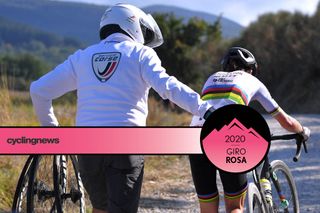 Annemiek van Vleuten (Mitchelton-Scott) was critical of the Giro Rosa organiser's decision to include gravel sectors into stage 2 of this year's route. The world champion won the Strade Bianche-style stage but only after being forced to run up the Seggiano gravel climb before then taking a solo win Arcidosso.

"Sometimes people ask me how your legs feel if you go all out," Van Vleuten wrote in post to Twitter Sunday morning before the start of stage 3, which includes a video of her running up the gravel climb.

"I think this video shows it... Could not even run or get into my pedals... But also example gravel sections in stage races are unnecessary, crazy and dangerous. Leave it up to 1 day like Strade Bianche."

The Giro Rosa was originally scheduled to take place June 26 to July 5, but was moved to September 11-19 as part of the revised Women's WorldTour calendar after the season was halted due to the coronavirus in March.

Van Vleuten won Strade Bianche on August 1, which was the re-start to the Women's WorldTour season, after a stellar performance on the white gravel roads of Tuscany.

She expressed concerns, however, about the gravel being added to the Giro Rosa. Van Vleuten attacked at the base of the Seggiano climb during stage 2 on Saturday but when she hit the thick gravel located on the steep incline her back wheel slid out from under her causing her to go down.

She got back up but was forced to run up the steeper section of the climb. She received some help from neutral support and eventually got going again, building her lead out to 1:16 over chasers Anna van der Breggen (Boels Dolmans) and Kasia Niewiadoma (Canyon-SRAM) at the finish.

"Annemiek is just on another level, she even had a bit of a walk just because the gravel was super bad on that final section and she had to get off but kept her calm and showed her class," said her director Andrew Smith.

Van Vleuten now leads the overall classification by 1:18 ahead of Van der Breggen and Niewiadoma heading into stage 3.

Sometimes people ask me how your legs feel if you go all out. I think this video shows it... 🙈🤣 Could not even run or get into my pedals... But also example gravel sections in stageraces are unnecessary, crazy and dangerous. Leave it up to 1 day like @StradeBianche https://t.co/8aAkJIkgLXSeptember 13, 2020