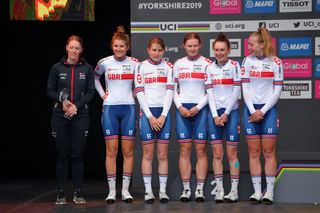 Nineteen-year-old British rider Anna Shackley has signed a two-year contract to join the SD Worx women's squad from next season. The Dutch team is currently known as Boels Dolmans, and is home to the likes of Anna van der Breggen, Amy Pieters, Jolien D'hoore and Chantal Blaak.

Last season on the road, Shackley finished 12th in the junior women's road race at the UCI Road World Championships in Yorkshire, and also took 13th place overall on home soil at the Women's Tour of Scotland, as well as third overall at the Watersley Ladies Challenge in the Netherlands.

In January at the British Track National Championships, Shackley became the points race national champion and was also part of the British Cycling Academy squad Team Breeze that won gold in the team pursuit.

"I'm extremely proud of the fact that this top team would want to have me as a member," Shackley said in a team press release on Tuesday.

She added that she'd like to develop into a climber, and now has the opportunity to head in that direction with her new team.

"I don't have much experience yet with properly high mountains, but I want to become a rider who excels in events like the Giro d'Italia," she said. "I'm hoping to achieve a good ranking in these multiple-stage races. I also hope to do well in hilly one-day races, such as Liège-Bastogne-Liège."

Joining the likes of Olympic road race champion Van der Breggen and former road race world champion Blaak will ensure that Shackley will be able to learn from some of the world's very best.

"I haven't met them in person yet, but I've seen many women's races on the television in recent years, so I know what they have achieved. I hope to learn much from their vast experience in the coming years," she said.

"We have given her a two-year contract, with an option to extend it by two more years," he explained. "We firmly believe that she has a unique driving force inside her. It will be a great challenge to help such a talented rider develop."