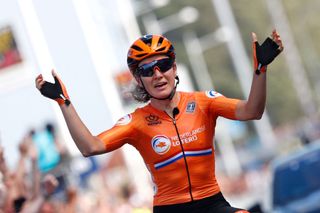 For Amy Pieters, the 2019 season was one of her best. The Dutchwoman is among the team leaders at the number one team in women's cycling, Boels Dolmans, but personal highlights came in national colours throughout the year.

The jersey she'll wear on the road this year – that of European road race champion – signifies her greatest success, when she outsprinted Elena Cecchini and Lisa Klein to take the gold medal on home ground in Alkmaar last August.

Days later came another gold, in the mixed relay, which was followed by the rainbow stripes in the same event at the World Championships in Yorkshire.

And then there's the track, where Pieters and Kirsten Wild are a formidable duo. The pair won the Madison event at the Hong Kong UCI World Cup in January and did the same in Minsk in November. In between that came victory at the Track World Championships, while Pieters also won three golds at the Dutch Nationals. It's no surprise then, that the pair are among the favourites for success at this year's Tokyo Olympics.

"I can't complain," Pieters modestly told Cyclingnews at a recent Boels Dolmans training camp. "It started very good on the track, becoming world champion, then the spring was OK, and then it was the Europeans and Worlds, of course.

"I think I was better in the Classics on the road in 2018, but last year it was the big championships. I hope that in 2020 I'll be as good again.

Tokyo, of course, will be the major goal for the upcoming season, but it's not all about the Olympics. A Track Worlds defence comes up at the end of February, while there will be trade team goals to think about in between.

"I'll only go for the track in Tokyo. That's a rule from the Dutch federation, but I think you need to focus on one thing. I think me and Kirsten Wild can have a good chance in the Madison, so I'll try to do my best for that," Pieters said.

"Of course, it's important, but the season is more than that. There's the Worlds on the track, spring classics on the road, the Nationals are always important. The Olympics are important, and I think if we can take a medal then it'll be something special. But it's also only 13 minutes, you know? In road races you have four hours, so everything has to be perfect on the track.

Pieters, currently racing on the track at the Six Days of Berlin, has goals on the road this season, too, then, but it'll be a case of waiting and seeing where exactly she can contend, rather than focussing on one big race.

For example, last spring saw her finish in the top five at the Ronde van Drenthe, Nokere Koerse, Gent-Wevelgem and the Healthy Ageing Tour, while also finishing 10th at the Tour of Flanders, where she was second in 2018.

It's a part of the team's philosophy that every rider gets a chance to compete and, with teammates of the calibre of Anna van der Breggen, Christine Majerus, and Chantal Blaak, it's no surprise that designated race leaders are decided on the road rather than months in advance.

"I always find it hard to say because we have such a strong team," Pieters said about her main road goal for 2020. "One of our strongest points is that we can play things really good with the whole team. It's also just that it needs to be your lucky day - sometimes you can have really good legs but someone else in front, or the other way around. I always want to see how I am on the start line, how I feel and we'll see what the result will be.

"I think it's easy when you only have two or three leaders, but I think it's also a bit boring. Last year Christine Majerus won the Boels Ladies Tour, and she's always working so hard for the whole team.

"I think none of us were as happy as when she won that. You could see that we were so happy to give something back to someone who is always helping. I think that's a reason why the team is so strong. You can't do it by yourself, and I think it's a really good job from Danny and Jack to encourage that."

Another thing allowed - and encouraged - by the team is for riders to focus their efforts on races not contested by Boels Dolmans. With track racing as well as the World and European Championships, the evidence for that is already in Pieters' palmarès. It's clear to see around the team too, with Amalie Dideriksen also heavily focussed on the track for 2020 and Majerus riding cyclo-cross through the winter.

Pieters said she's grateful for the opportunity to switch disciplines and compete away from the road, as she does, but it's also a case of staying engaged in the sport and her training through the long winter months, too.

"For me it's better to switch, but it's not for everyone. I've tried to do only road but for me the winter is too long then. It's too much training and you never race. Now, I need to do World Cups as well. My winter is basically: a week Spain, week track, week Spain, week track. So it's really switching all the time, and also I really like to race on the track so you can see how your condition is.

"On the road you stop in September and your next race is in March, so it's a really long time, and it's like 'what do I train for?' Some girls really like that, but for me it's too long and it gets a bit boring for me to be in Spain the whole winter.

"I do a lot of road training to prepare for the track. Luckily for me, it's quite fast and easy to change from road to track, and doing that helps me feel much better on the road, too. And I think I'm lucky that this team is supporting me to go to the Olympics on the track because I won't race that much on the road this year. For me, it makes both sides stronger."