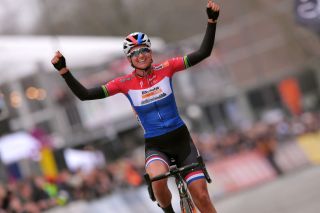 With a palmarès full of near-enough every major northern Classic in cycling, it's no secret that Chantal Blaak is heading into the 2020 season with one major goal in mind to complete the set.

During a decade-long career, the Boels Dolmans rider has ticked off wins at Le Samyn, Gent-Wevelgem and the Ronde van Drenthe, as well as the Amstel Gold Race in 2018. Last season, she added Omloop Het Nieuwsblad to the list after previously finishing on the podium three times.

But it's the biggest race of the cobbled season that still eludes her: the Tour of Flanders. After five top-10 finishes in a row, including two podiums in 2016 and 2017, the race is number one on Blaak's 2020 target list.

"Flanders is the one that is missing, yes," she told Cyclingnews at the recent Boels Dolmans training camp in Spain. "The whole spring [is my target] actually, because I'm the type of rider for the one-day races, and there are a lot of one-day races then.

"If I have to pick one race, then for sure it's Flanders. I will try to be as good as possible there, and I try that every year. But it's such a hard race to win.

"I had two podiums and a lot of top 10s, but I stopped counting. It's the same as with Het Nieuwsblad before – a lot of podiums and top 10s without winning and then last year I won it."

A women's Paris-Roubaix has long been mooted as a future addition to the calendar, with UCI President David Lappartient saying in late 2018 that a plan was being worked on.

If the race does eventually come to fruition, then Blaak looks among those best-suited to challenge. She said as much but, with seemingly no firm plans in the works, it's a case of wait and see.

"For me, it would be nice," she said. "Actually, I hoped that it could happen this year but yes, that would be very nice. When that race is here, then for sure, it's a goal for me, but I think we need to be patient a little bit."

Omloop Het Nieuwsblad was the highlight of a mixed 2019 campaign for Blaak. A strong start to the season saw her take top 10 placings at Flanders and Strade Bianche, while she was centimetres away from another Ronde van Drenthe win, just missing out to Marta Bastianelli in the sprint finish.

But things took a turn for the worse in the summer, shortly after her silver medal-winning ride at the European Games time trial in Minsk, Belarus. A back problem saw Blaak struggle through the rest of the season, while a busy schedule meant that there wasn't enough time to rest up and recover.

"I had three really good years, but last year was not really good," she said. "I won Het Nieuwsblad, which was a really big win for me because it was the one I was missing. I really wanted to win that one. I started pretty good but after the spring I got some back problems, I was tired, and everything together made it a hard time.

"After the European Games in Minsk I had my back problems, so I had to deal with that for two months. Actually, it continued until the end of the season. From June to September it was a hard time for me."

Blaak fought through the pain barrier with a slipped disc to race on to the end of the year. After racing her National Championships, she did a week at the Giro Rosa in support of eventual runner-up Anna van der Breggen.

After that, she raced La Course, the RideLondon Classique, the European Championships road race, GP Plouay, Boels Ladies Tour and then the Worlds road race before finally getting some rest.

"It was a slipped disc. It wasn't something small you could change quick; you just need to rest, but I didn't really have time for that. In those moments, everything I did was painful," Blaak said.

"With that kind of problem, it's best to take a few weeks off, take care of your body and then start building. Now I'm totally fine, with no problems at all, but during the season there wasn't time for that."

The Olympics and Boels Dolmans' future

Having put her back problem behind her, there's every chance that Blaak can finally get that Flanders victory she has dreamed of in 2020. And there's another ambition that could be ticked off this year, too: the Olympic Games.

Blaak hasn't raced at an Olympics during her career but was close to selection for Rio in 2016. With another tough, mountainous course coming up in Tokyo, the race isn't fully suited to her skillset, but she still hopes to make the four-woman squad.

"It's definitely a goal, but in Holland it's pretty hard," she said. "In Rio I was pretty close, so we'll see. The only thing I can do is to do my best and show that I'm good enough to go there. But I also think that if I go, I can be a really good helper, so they also look for that.

"After I won the World Championships [in Bergen, 2017], the feeling was maybe gone a little bit. But of course, it's something you want to do, no matter which sport you're doing. It's something you don't want to miss."

Regardless of whether Blaak is at the Olympics or not, by the time it rolls around in late July, there will hopefully be some good news for her trade team. Both Boels and Dolmans are ending their sponsorship of the team at the end of 2020, and team manager Danny Stam is busy looking for replacements.

For the riders on the team, though, it's not something they worry about on a day-to-day basis. Stam and new team co-leader Jack Seehafer both seemed hopeful about the prospects of finding new sponsorship for the coming years – after all, this is the best team in the sport for the past four years.

"We still have on season ahead. Maybe it will change during the season ahead, maybe not. But for now, nobody is worried. We start the season again on zero in February and then we'll see. It's not a subject here in the group. No stress."