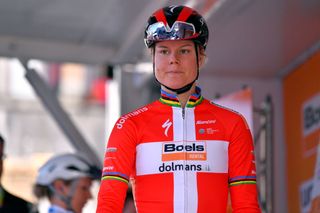 Amalie Dideriksen is heading into the new season looking to put a tough 2019 campaign fully behind her. For the Dane, consistency and getting back to challenging for wins are the main goals after a year which saw her take one podium spot – victory at the Danish National Championships road race.

The 23-year-old hasn't yet managed to return to the heights of 2016 when she won the World Championships road race in Qatar, and admitted that she struggled with outside expectations afterwards. But now, in her sixth season with Boels Dolmans, Dideriksen said that there were positives to take from last year despite the disappointment.

"I think I definitely wanted more, starting the year, so it was a difficult year for me," Dideriksen told Cyclingnews at the Boels training camp in Spain. "There are some positives to take out of it. I wanted to achieve more, results-wise, but I feel like I continued my development, and I just have to take that from 2019.

Dideriksen: I'm not used to winning so much

"I still did all the training and everything so I still feel up to my level. I just hope that it will show soon so that I can show the potential I think I have.

"I would like to get a win this season. It's hard to say which yet, because I don't know where I'll be going. But to be up there in the finals is my main goal, along with being more consistent."

Dideriksen couldn't pinpoint one specific problem that set her back during the season, saying that she "just missed that last little edge that makes all the difference at the top of pro sports."

We're now just over three years since the biggest moment of her career so far – outpacing Kirsten Wild to take the rainbow jersey in Qatar. She was just 20 years old back then – the youngest Worlds winner since Marianne Vos in 2006 – and the surprise win put her on a trajectory that she wasn't quite ready for at the time, she says.

"It came as a big surprise for me and everyone else," said Dideriksen. "Suddenly, people expected me to be on podiums in every race, but that was just not where I was in my career.

"That was definitely hard to accept for myself, that it doesn't really change who you are or where you are. There's still a lot of hard work that needs to be done to be at the top of races, and that's still what I'm doing – trying to be there.

"After I became world champion it made a huge change for me because it was really difficult to suddenly get a lot of attention and maybe not living up to everyone else's expectations all of the time.

"That made me realise that it's just not how life works. You can't really do what everybody else expects all the time, so I'm starting to focus more on myself, and trying to achieve my own goals instead of trying to achieve everyone else's."

If she's found it tough to deal with increased expectations since her win, then Dideriksen certainly has teammates who have been through similar experiences. Racing alongside her at are two former world champions in Anna van der Breggen and Chantal Blaak, plus current European champion Amy Pieters.

The democratic principles in place at the team will also help – everybody gets a chance to lead the team at races, whether they're serial winners or domestiques. At Boels, there's no chance a rider struggling for form is consigned to permanent domestique duty.

"I definitely think that it's important, that everyone gets their own chances and opportunities," she says. "I really like that girls like Anna, Chantal and Amy want to do that. They could go for every race if they wanted to.

"I think that having girls want to sacrifice their own chances makes a good group, and it's something you don't really see from the outside. I really like when everyone comes together like that."