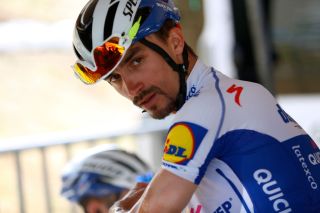 With less than a week to go until Paris-Nice,Julian Alaphilippe has admitted that he's behind schedule heading into his first major goal of the 2020 season.

The Deceuninck-QuickStep rider returned to racing after the Tour Colombia 2.1 at the weekend, heading to south-eastern France for a pair of one-day races, but struggled to be competitive on both days.

"I'm exhausted and the rain has finished me off," Alaphilippe told l'Equipe after the race, a hilly 203km day ran in poor weather.

Alaphilippe in no hurry to target GC at Tour de France

It's still early days in the 2020 season but Alaphilippe has so far struggled to match his opening to last year, his best season yet, where he won three stages across the Vuelta a San Juan and Tour Colombia 2.1, finishing second overall at the latter. He went on to win Strade Bianche, Milan-San Remo and La Flèche Wallonne before leading the Tour de France for 14 days.

Alaphilippe's best result so far has been third on stage 4 in Colombia, while he was forced to pull out midway through the Vuelta a San Juan with stomach issues.

Deceuninck-QuickStep directeur sportif Davide Bramati said that the Frenchman was disappointed by the results of the weekend's races, too.

"Julian is disappointed because he wanted to win," Bramati told l'Equipe. "But when the rain came, his legs got stiff.

"He had two good days of racing and one or two attacks here [Sunday]. Let's stay calm. He still has a week before Paris-Nice."

Alaphilippe was this week due to recon the final three stages of the French race, days which are set to be decisive for the second WorldTour stage race of the season. After his travails at the weekend, though, the planned sortie has been postponed.

After Paris-Nice, Alaphilippe is set to defend his title at Milan-San Remo before heading to Belgium for Dwars door Vlaanderen and a Tour of Flanders debut, plus the full Ardennes week.

Later in the year, a Tour de France return beckons ahead of the Tokyo Olympics, though he has said that a general classification challenge in France isn't likely.