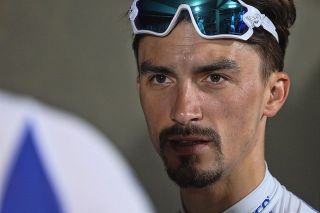 Julian Alaphilippe was forced to abandon the Vuelta a San Juan on Tuesday. The Frenchman, one of the race favourites, was 30 seconds down on race leader Fernando Gaviria (UAE Team Emirates).

Alaphilippe's Deceuninck-Quickstep team made the announcement on Twitter, saying he was suffering from stomach problems. A team spokesperson told Cyclingnews Alaphilippe developed stomach problems Monday and hasn't been able to eat as a result.

Stage 3 of the Vuelta a San Juan, the 15.5km individual time trial, is a stage that Alaphilippe won in 2019 in his highly successful build up to a season that included 14-day stint in the Tour de France race lead.

Alaphilippe is due to resume his season at the Tour Colombia 2.1 in February before using Paris-Nice as a final tune up for the Spring Classics. His schedule includes his first participation in the Tour of Flanders before his main goal, the Ardennes Classics - Amstel Gold Race, La Flèche Wallonne and Liège-Bastogne-Liège.

The team said Alaphilippe will look to leave Argentina today and travel to Colombia, joining teammates who are already there for a pre-race training camp.

Sadly, due to stomach problems, @alafpolak1 is forced to abandon #VueltaSJ2020 and won't be at the start of the today’s TT. We wish him a speedy recovery!Photo: @GettySport pic.twitter.com/NZHjLZe92XJanuary 28, 2020