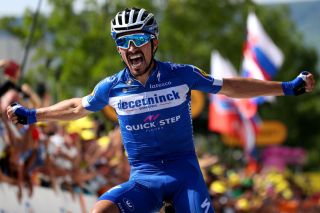 Panache personified: Julian Alaphilippe (Deceuninck-QuickStep) wins stage 3 of the 2019 Tour de France in Epernay, and with it takes the yellow jersey as leader of the race (Image credit: Getty Images)

Julian Alaphilippe has confirmed he will make his debut at the Tour of Flanders in 2020, saying he needs "new challenges".

Alaphilippe won Milan-San Remo, Strade Bianche, and a second Flèche Wallonne this spring, but has yet to taste the cobbled Classics of northern Belgium.

Having hinted at a debut earlier in the year, Alaphilippe confirmed his plans to race the Tour of Flanders in 2020 while collecting the Velo d'or prize, with the possibility of other races in Flanders in the preceding week as part of a radically different spring programme.

"I'm going there to see what it's all about," he told L'Equipe "I need new challenges."

Alaphilippe is Deceuninck-QuickStep's leader for the Ardennes Classics later in April but he is ready to assume more of a domestique role in Flanders.

The Frenchman can walk into almost any team, but Deceuninck-QuickStep have unrivaled strength in depth. Even if Philippe Gilbert is moving to Lotto Soudal, they still have Zdenek Stybar, Bob Jungels, Yves Lampaert, and Kasper Asgreen.

Recounting his conversation with team boss Patrick Lefevere, Alaphilippe expanded on his role during the spring as a whole, where he'll be expected to lead the line through to Liège-Bastogne-Liège on April 26.

"[He said] 'We are okay with you doing the Tour of Flanders but do not make it your number one objective, because, if it doesn't work out, we still need you up to Liège," Alaphilippe said.

"I'm an important leader for the Ardennes but Patrick also knows that, if I'm not too bad at Flanders, I'll be important for the team."

It is often said that the Tour of Flanders requires experience, with its narrow country roads and sharp cobbled climbs sometimes taking years to master, but the likes of Bob Jungels and Alejandro Valverde have shown in recent years that instant impact can be made.

Alaphilippe, who won 12 races in 2019 as well as finishing fifth at the Tour de France after a memorable 14-day stint in the yellow jersey, will begin his 2020 campaign in South America for a third year in a row, with the Tour Colombia.

While he won two stages at Tirreno-Adriatico this year, he will instead return to Paris-Nice ahead of the Classics, with L'Equipe claiming he will not ride Milan-San Remo. The 2020 Paris-Nice route is expected to include a time trial stage in his Alaphilippe's home town of Saint-Amand- Montrond.

"I've just had an exceptional season but I never rest on my laurels," Alaphilippe told L'Equipe. "I'm starting again from zero."