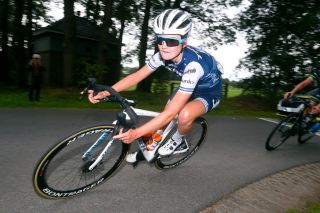 Trek-Segafredo announced on Friday that Abi Van Twisk will put her professional cycling career on hold as she prepares to welcome her first child in February. The British rider is in her second year of a two-year contract with the American outfit and will effectively take maternity leave, with full pay to the end of her contract, but she is not putting pressure on herself to return to the sport immediately following the birth of her child.

Trek-Segafredo confirmed that Van Twisk has not competed since Le Samyn des Dames in February, after which the racing season was halted due to the COVID-19 pandemic. Her two-year contract expires in December of this year.

"I am not planning on rushing straight back into professional cycling at the top level," said Van Twisk. "I love it, and know I will miss it, but, for now, I want to focus on motherhood and see what an addition it will be to my life. It's a beautiful time, and I am incredibly excited for the new chapter and the new opportunities to come."

The UCI introduced a new maternity clause to its standard contracts for Women's WorldTeams that began in January. As part of the new standard contracts, top-tier teams are required to pay a minimum salary to their riders, along with other social benefits, including maternity leave.

Trek-Segafredo have gone above the currently maternity leave clause stipulated in the new standard contracts for the Women's WorldTour, and have instead opted to pay Van Twisk 100 per cent of her current contract, which runs out in less than four months.

The most high-profile athlete to take leave from the sport due to pregnancy was Van Twisk's teammate, Lizzie Deignan, who took time away from the sport in 2018 to give birth to her first child, and returned to the peloton with Trek-Segafredo in the spring of 2019.

Van Twisk, 23, said that she has not decided if she will return to professional racing following the birth of her child, and doesn't want to feel pressured to make that decision at this point. She said that she may yet decide to pursue a more creative field because of her passion for art, or perhaps combine sport and art in her future career.

"I don't want to put pressure on myself to come back to racing straight away, as motherhood is a complete jump into the unknown. I know that I am still relatively young, so in a couple of years, if I decide I want to return to professional cycling, it is still very possible, and there is time to do so. It's so nice to have worked with Lizzie this year, and see how she has approached parenthood, and her very balanced and successful return to the workplace," Van Twisk said.

"It's hard to say what my professional plans will be once I'm a mother, but I'd like to combine my two passions – bikes and art. I would love to stay in the sport, but explore a more creative path, which was previously limited. I have always loved art and design – it has been a release for me throughout my cycling career – so I would love to build on that and unite the two. I have a lot of ideas and aspirations in my head that are waiting to be fulfilled."

Van Twisk began her professional cycling career in 2016 with the Drops Cycling team, and then joined Trek-Segafredo in its inaugural year at the start of 2019. Her career highlights include fourth place on a stage at the Women's Tour Down Under and top-20 finishes at the Madrid Challenge and the Tour Down Under, while competing in a host of top-level international events with Trek-Segafredo.

"I want to say a huge thank you to Trek, the sponsors, and every person who contributes to the running of the team. They are the most supportive, professional, and inspiring team to be a part of – in terms of the racing itself, tackling injury, and now entering motherhood," Van Twisk said.

"The whole network is the epitome of how a professional women's cycling team should be run. I have had an incredible two years on the team, racing at the top of the sport, and my teammates are some of the most inspiring women I have ever met, on and off the bike. I cannot wait to watch them smash many more bike races in 2021!"