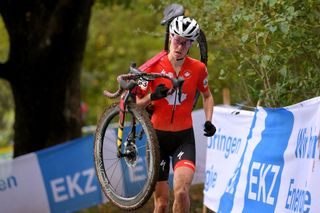 The 2020 Pan-American Cyclo-cross Championships that were initially scheduled to take place from November 8-9 in Fayetteville, Arkansas, have been cancelled due to coronavirus concerns. Organisers made the announcement Tuesday but vowed to return with a UCI-sanctioned FayetteCross on October 2-3 in 2021.

"We made the decision to cancel in the interest of the health of athletes, spectators, and the entire community of Northwest Arkansas," Race Director Brook Watts said in a press release.

"The good news is we have made a commitment to stage FayetteCross on Oct. 2-3 in 2021. People will be able to have a sneak peek at the 2022 World Championships course in Centennial Park."

FayetteCross will host Pan Am Championships at 2022 Worlds site

The UCI confirmed last February that it had selected Fayetteville to host the 2022 Cyclo-cross World Championships, which will mark the return of the event to American soil since Louisville, Kentucky hosted the cyclo-cross Worlds in 2013.

It was later announced that the 2020 Pan-American Championships would be held at the same venue and it was meant to offer racers the chance to preview the Worlds course at Centennial Park at Millsap Mountain in Fayetteville.

FayetteCross was held last season as a C2-sanctioned race and organisers confirmed they will seek UCI sanctioning again in 2021 for a race held at the same venue.

"FayetteCross 2021 will be an international event at Centennial Park in Fayetteville, also the site of the 2022 Union Cycliste Internationale (UCI) Cyclocross World Championships Jan. 29-30, 2022," organisers confirmed in a press release.

Defending champions Kerry Werner (Kona) and Maghalie Rochette (Specialized-Feedback Sports) won their titles at the 2019 Pan-American Cyclo-cross Championships in Midland, Canada, and will hold those titles until next year.

Trek announced in July that the UCI Cyclo-cross World Cup in Waterloo was also cancelled due to risks involved with COVID-19 coronavirus, with a commitment to return in 2021.

The gravel racing scene has also been hit by several cancellations this year. Organisers of the of Old Growth Classic, the popular gravel race in Big Basin State Park are the latest to announce that it will be cancelled. Non-profit Mountain Bikers of Santa Cruz annually host the event and donate to MBOSC and CA State Parks. They have set up a fundraiser to repair roads and build new trails in Big Basin.