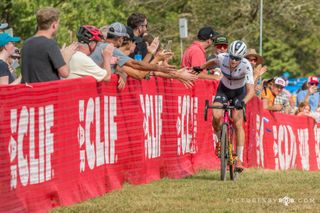 The races will take place at Centennial Park at Millsap Mountain, which will also host the 2022 UCI Cyclo-cross World Championships.

Race director Brook Watts told Cyclingnews that as a part of a four-year plan leading up to the 2022 World Championships in January 2022, organisers examined their options for this year and determined that hosting the Pan-American Championships November 7-8 was the best choice for Fayetteville.

"At the core of my strategic plan for the Northwest Arkansas [NWA] region is to raise national and international awareness of this very special area showcasing the great quality-of-life and superb cycling culture, with the catalyst being four years of cyclo-cross events of an increasingly higher stature each year," promoter Brook Watts said in an announcement sent to Cyclingnews.

"Last October, FayetteCross had two days of C2 racing and wildly exceeded our expectations for both racer and spectator numbers," Watts said. "Hosting the Pan-Am's will pick up where last year's C2 race left off. Our post-event feedback was so incredibly positive and we'll expect even more amateur and elite racers to experience all that the NWA region has to offer."

Fayetteville 2022, the group behind the 2022 UCI World Championships, is partnering with Experience Fayetteville, the convention and visitors bureau for Fayetteville, to host FayetteCross 2020. Parkven Productions, Watts' promotion company, is managing the event.

With the expected expansion of the UCI World Cup next cyclo-ross season, bidding for a spot in that series would have been a logical choice for FayetteCross as it builds toward 2022, and Watts, who previously promoted the CrossVegas World Cup and was race director for the Waterloo World Cup, said the new series owner, Flanders Classics, encouraged him to do so. But in the end, hosting a World Cup next year wasn't a good idea for the race or Fayetteville.

"We face some scheduling hurdles in Fayetteville," Watts said. "Like many locations in the US, fall events dominate the weekend schedule. Ultimately, I believe that the Pan Am's are a better fit for the NWA cyclo-cross strategic plan as we head to 2022 world championships. As a bonus, we can offer the multitude of grassroots race categories plus introduce fun things like the Relay Races we'll offer in 2020."

Despite having been integral to making the Pan American Championships a reality, Watts has never personally organised the event. This season will be his first.

"The Pan Ams have the magic of awarding a special jersey that is displayed by the champions at international races," he said. "That Pan Am jersey, now recognised by even the average European fan, brings me great satisfaction. And the opportunity to expand the sport in our hemisphere has great appeal to a cross evangelist like me."

In s statement sent to media with today's announcement, Experience Fayetteville CEO Molly Rawn said the Pan-Ams will be a showcase for the area and provide a good test run for the world championships.