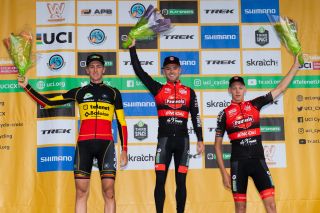 UCI Cyclo-cross World Cup organisers Flanders Classics announced a revised 2020-2021 calendar on Wednesday that leaves off the early rounds in Waterloo, Wisconsin and Dublin, as well as moving the Zonhoven round from late October to December 13 in place of the planned race in Antwerp.

The series will now kick off with the Vlaamse Druivencross in Overijse, Belgium on November 1. The press release said the Waterloo and Dublin rounds would be postponed to the 2021-2022 season.

The move avoids a potential conflict with the 'Super Sunday' on October 25, when the men's and women's Paris-Roubaix will overlap with the final stage of the Giro d'Italia and stage 6 of the Vuelta a España.

The Waterloo round was originally due to take place on October 4, along with stage 2 of the Giro d'Italia and the Liège-Bastogne-Liège men's and women's races.

However, with the coronavirus pandemic in the US far from under control and travel bans on international travelers still in place, it could have been difficult to hold a World Cup round in that country. Dublin's round would have conflicted with the Giro and the Tour of Flanders men's and women's races.

"It seemed opportune for all parties to shift the start of the UCI Cyclo-cross World Cup to the beginning of November," explained Tomas Van Den Spiegel, CEO of Flanders Classics.

"On the one hand, this is due to the shifting of the road racing season, which will be in full swing in October. On the other hand, there continue to be uncertainties in terms of future measures, both national and international, to keep the Covid-19 pandemic under control.

"The Union Cycliste Internationale (UCI) and ourselves are grateful to the organisers and the cities for their constructive and flexible attitude. We also hope that the financial effort we are making as regards the local organisers will help them make the necessary arrangements in these circumstances."

The UCI gave organisers some relief in cutting in half the licence fee they would normally pay to hold the races.

UCI President David Lappartient said: "I regret the absence of races such as Waterloo and Dublin, which we will happily see again the following season.

"After the road and mountain bike calendars for UCI events, a new and important part of the UCI international calendar is being created. It is an excellent signal for the athletes and all the participants in our events. As is the case for all the new dates, the resumption remains subject to the health situation in the countries hosting the competitions."