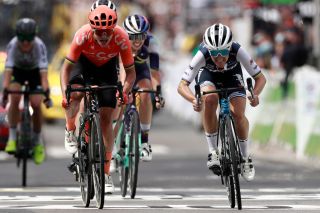 When Annemiek van Vleuten attacked on the bottom of the Cote de Rimiez climb, with 43 kilometres to go in La Course, Lizzie Deignan was the first rider to jump straight onto her wheel. Just behind the Briton was her Trek-Segafredo teammate Elisa Longo Borghini.

The world champion and newly crowned European champion was playing her ace card, trying to split the peloton on the main challenge of the day and get away knowing that from the top of the climb, there was a long, flat 30km to the finish line in Nice. But if Van Vleuten wanted to get away, she’d have to drop these two first, and as the last few weeks of racing have shown that wasn't going to be easy.

Van Vleuten has been unstoppable in 2020. Since she won the rainbow stripes in Yorkshire last September she has won five races in a row at Omloop Het Nieuwsblad, the trio of Spanish one-day races Emakumeen Nafarroako Klasikoa, Clasica Femenina Navarra and Durango-Durango Emakumeen Saria and Strade Bianche. Two days before La Course, she also won the debut European road race title. Recent history says that when Van Vleuten accelerates at the front, as she did here in the French Riviera, she usually goes on to win.

Van Vleuten’s move on Rimiez didn’t allow her to escape solo as she perhaps hoped, but it did split up the peloton and form the race-winning group of six, that included two-time La Course winner Marianne Vos (CCC Liv), Parkhotel-Valkenburg’s Demi Vollering, Kasia Niewiadoma (Canyon-Sram), and crucially Trek duo Deignan and Longo Borghini.

Trek-Segafredo had the numerical advantage and importantly, two of the most in-form riders since the racing season restarted, aside from Van Vleuten. Aside from La Course, the only other international road race the Dutchwoman has started this year but not won is GP Plouay, where not uncoincidentally Deignan took the victory thanks to stellar support from Longo Borghini.

At GP Plouay, Trek got their tactics spot on for Deignan. When the Briton followed compatriot Lizzy Banks’ attack with 35km to go, Longo Borghini marshalled the chase group diligently. Anyone that tried to follow and chase down the leading duo, the Italian zoomed behind, snuffing out. Deignan and Banks were then able to build up enough of a lead that they’d go on to sprint for the win themselves, where Deignan took her third title and first win of the season.

At the European road race two days later, Longo Borghini again showed her strength, coming close to the victory and only narrowly being beaten by Van Vleuten in the finale, after being the first to attack on the final climb that caused the winning split. Such is Longo Borghini's form, her results coming into La Course consisted of eight race starts since July and six top-five results.

A couple of weeks earlier at Il Lombardia, Trek’s men’s team showed how having numbers in a breakaway - in their case, three riders out of six - doesn’t necessarily translate to a winning result. But in this finale, Longo Borghini and Deignan executed a masterclass.

Not even a 13km turn on the front in the final 30km from Van Vleuten was enough to dispatch anyone, and attention turned to the sprint where two-time La Course winner Vos was sure to be the main threat. Knowing that Deignan is the better sprinter of the pair, Longo Borghini was deployed as attacker, repeatedly, trying to force the others to chase and use energy. If the elastic snapped, she’d be away to the line alone. If it didn’t, Deignan could sit and wait patiently for the sprint. Having two of the best tactical brains in the team car, in former racers now directeur sportif's Ina-Yoko Teutenberg and Giorgia Bronzini, didn't go unnoticed, either.

The Italian went first with 2.5km to go, drawing out Vos. At 1.8km to go, Longo Borghini tried again, with Vos again jumping straight onto her wheel. With 400 metres to, having twice been distanced by chasing back on, Longo Borghini went for it a third time. It was the killer blow. Vos was forced to latch onto her wheel and hit the front. Vos started her sprint early, and had to go from a long way out. Deignan could simply follow, jumping into Vos’ slipstream before throwing her bike superiorly to cross the line in first.

Deignan won her second race in five days and Trek-Segafredo had executed a perfect race.