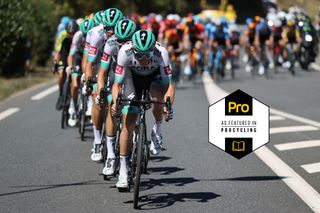 Strong winds were predicted for stage 7 of the Tour de France from Millau to Lavaur, in the notoriously blustery Tarn department. Wout van Aert may have won, just as he did when crosswinds struck in Albi on stage 10 last year, but this was far from a copy-and-paste of that day.

Before the wind had even really struck, the race was split into pieces thanks to Bora-Hansgrohe and their efforts to wrest the green jersey back from Sam Bennett, and win the stage.

It wasn’t the wind, but a trio of early climbs within the first 20 kilometres that did the real damage. The Côte de Luzençon, a category 3 climb just 9km in at 6.1 per cent in gradient, would not have normally been too much trouble to the sprinters on what should have been a day they’d all earmarked in their roadbooks. But then again, the stage started with the unusual scenario of Sam Bennett, rather than Peter Sagan, being in the green jersey. Bora-Hansgrohe, knowing the wind was blowing ahead plus that there was an intermediate sprint with valuable points just 58km up the road, pounced. The squad sent everyone to the front, with Sagan closely tucked in among them, and accelerated.

Seven years ago, into nearby Albi on stage 7 of the race, Sagan’s then Cannondale team pulled off an almost identical manoeuvre. On a day similarly designated for sprinters, his team had other ideas and powered off on the second climb, pushing the sprinters out of the back and out of contention. That day, Sagan swept up maximum intermediate points and the stage win. There were also echoes of stage 16 in 2017, when Michael Matthews’ Sunweb squad set a hard pace on the first climb of the day to put green jersey Marcel Kittel into trouble, a tactic that worked masterfully and resulted in them taking the green jersey and the win.

The damage done this time around was almost instant. Giacomo Nizzolo was the first to be dropped, then Caleb Ewan, Mads Pedersen, Alexander Kristoff and Elia Viviani. Green jersey wearer Bennett hung off the back of the front group by a few hundred metres. Bora had reduced the peloton to just 93 riders.

After cresting the Côte de Luzençon, Daniel Oss pushed Bora and the peloton on. With 153km to go, six mint green helmets from the German squad were visibly lined out at the front as if they were doing a finishing lead-out, rather than easing into the start of a stage. Still, there were so many teams and riders with vested interests in contesting the stage, enough groups that could merge and put team-mates to work, and still so long to the finish, it seemed inconceivable one team could keep up this pace all day.

Deceuninck-Quick Step deployed Kasper Asgreen to drop back to help Bennett. The Danish champion made a difference, towing the green jersey group to within touching distance of the peloton. But just as the two were about to merge, Bora hit it again, determined to keep Bennett at bay. Sagan might not be the most talkative in interviews but the Slovak was visibly marshalling his team-mates, and with Gregor Mühlberger taking a turn on the front and Asgreen not far from latching on, the elastic stretched back out. The combination of a drag uphill on an uncategorised climb, plus a swirling cross-headwind meant that within minutes, the gap between the two was back to 30 seconds. Bennett would never get as close to rejoining the front of the race again.

The phase of the stage to the intermediate sprint featured a 15km flat stretch but also another long categorised climb, and on the exposed roads with the wind in the front group’s favour, the gaps expanded. Bennett started the day 12 points ahead of Sagan in the points classification, but now the three-time world champion had a clear shot at the intermediate sprint and with the green jersey group over a minute back (with the rest of the sprinters a further 1:45 behind) also the stage victory. Bora led Sagan into the sprint, but the Slovak was pipped to the line by Matteo Trentin. Still, he picked up 17 points over Bennett and virtually retook the green jersey.

The road started going up the third-category Col de Peyronnenc as soon as the riders passed through the intermediate sprint. It was just three per cent gradient but a slog at 14km, and it did everything to help the gap grow. Bora still had five teammates riding for Sagan, while all of the GC contenders were in group one, too - Jumbo and Ineos had all but one rider there. Group two, meanwhile, was reliant on just two of Bennett’s teammates, Tim Declercq and Bob Jungels, to chase, with everyone else having no reason to contribute with teammates up the road. By the top of the climb, with 94km to go, Bennett’s group was almost four minutes back, with group three at almost seven minutes.

After passing through Castres the peloton changed direction, turning right onto exposed roads heading west to Laveur, and crucially cutting into a cross-tailwind. Ineos, anticipating what was coming and that echelons could form, piled all seven of their riders, including Egan Bernal, to the front as they raced through. Before Paris-Nice last year, Bernal had never ridden in crosswinds, not that you’d notice. Back then, Luke Rowe expertly guided the Colombian through the carnage on stage 1, but with the road captain long distanced today, it fell to the former world champion Michał Kwiatkowski - far from a slouch in these conditions - to do so this time. As they took the decisive right turn around the roundabout, the Pole checked once behind him that Bernal was in his wheel and it was all he needed to accelerate.

With the wind coming over the riders’ left shoulders, Kwiatkowski hugged the right hand side of the road, elbows over his bars, taking what little shelter there was and stretching the peloton out in a long line behind him. Within a kilometre there were echelons and gaps opened up, as Julian Alaphilippe joined in taking a turn. The duo, uncoincidentally, were instrumental in causing similar damage on stage 10 of the Tour last year, when the race went into nearby Albi.

That day, Thibaut Pinot was one of the biggest losers, conceding 1:40 to his rivals. This time around, Pinot had learnt his lesson, with five of his seven team-mates surrounding him and keeping him safely in contact. It wasn’t the same for Tadej Pogačar, who started the day in third on GC, Mikel Landa or Trek-Segafredo duo Richie Porte and Bauke Mollema. All cut adrift, all lost time. By the finish line, they would concede 1:21.

After a quiet opening week, the Tour had just burst into life as we knew it always would.