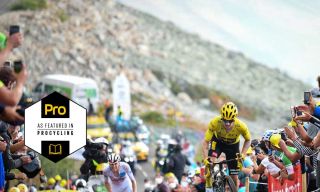 The Col de la Loze cast a long, long shadow over the 2020 Tour de France, which isn’t surprising given its size. The first 16 stages of the race were all contested with the understanding that this single climb, the high point of the 2020 edition and arguably one of the hardest few summit finishes ever contested in a bike race, would define the GC. To paraphrase Henri Desgrange, the inventor of the Tour de France, on the occasion of the Col du Galibier making its debut in the face in 1911, oh Peyresourde! Oh Marie Blanque! Oh Grand Colombier! Compared to the Loze, you’re gnat’s piss.

The scenery on the Loze was stunning. The road was a marvel of creative engineering - the way it reared, flattened, twisted and changed, especially near the top, was really unusual compared to most other Tour climbs.

The riders looked exhausted in the desperate drag race of those final few kilometres, and the shots of them as they winched themselves up were revealing in a way that the television camera often misses. The aim of putting a climb like the Col de la Loze into the Tour de France is to strip back the protective layers of the GC riders and expose them.

It was a memorable day for those reasons, and ASO will surely bring the race back to the climb in coming years.

However, it told us little that we didn’t already know. The top nine going into it all came in the top 10 on the stage (Jumbo-Visma’s Sepp Kuss in fourth on the day was the interloper; Nairo Quintana of Arkéa-Samsic started the stage in 10th but lost 25 minutes). The climb shuffled the favourites a little, but it mainly chiselled the gaps a little wider than they were before.

The Col de la Loze was as pure a physical test of climbing ability and resilience as the 2020 Tour could offer. The changes in gradient offered a challenge in pace judgement, and there was an element of tactics in Kuss being in among the leaders and able to help Primož Roglič, but once the leaders’ group had been reduced to the top GC riders, it was a head-to-head between them.

The general classification of the 2020 Tour has been less dynamic than in previous years. Of the mountain and middle mountain stages, the favourites mainly rode in together on stages 2 (Nice), 4 (Orcières-Merlette), 6 (Mont Aigoual), 15 (Grand Colombier) and 16 (Villard-de-Lans). In the Pyrenees, in the Loudenvielle stage, Tadej Pogačar attacked and gained time, but the others mainly rode in together; the next day to Laruns they were spread into three groups separated by less than a minute. On the big Massif Central stage to the Pas de Peyrol, the steepness of the finishing climb put another minute between Primož Roglič, the first of the favourites home, and Enric Mas, who brought up the rear.

What all the ‘GC days’ so far this Tour have in common is that almost all the action, crosswinds aside, has happened on the last challenge of the day, on just a handful of days. There are a few reasons for this. First, the strongest rider - Roglič - is on the strongest team - Jumbo-Visma, and they have made it their business to control the race right up until those crucial late moments, the better to give Roglič a springboard. Second, the period of lockdown training looks to have made riders risk-averse.

A controlled race is not at all unusual in the modern era. Jumbo-Visma are just implementing the same tactics as Team Sky/Ineos have done in most years since 2012, and arguably even more effectively.

However, the last two Tours at least have seen more dynamic GC contests - in 2019, the flat and rolling stages played a big part in the shape of the race; in 2018 both Steven Kruijswijk (Jumbo) and Mikel Landa (Movistar at the time) went on long-range attacks in the mountains which put severe pressure on Sky/Ineos. Nobody has been able to do that to Jumbo this year – in the Pyrenees Roglič lost his support, but by that point it was man against man anyway.

And today Bahrain-McLaren applied pressure on the Col de la Madeleine, which could have put Jumbo under pressure, but then they carried on rolling through on the valley road, which just saved the Dutch team energy, arguably the opposite of what they should have been trying to achieve. The fact that Bahrain’s Mikel Landa was the first of the favourites to get dropped in the final part of the Loze made their efforts look even less like a coherent plan.

But there is a third reason.

The 2020 Tour route has been described as one of the most complex and toughest in history. With incursions into the Alps on days two and four, and stages ducking in and out of the Massif Central throughout, plus the Pyrenees and another hard few days in the Alps, it looked brutal.

However, it was missing something. In the ITV Tour podcast’s race preview, David Millar made the very prescient observation that the hard mountain stages didn’t come with early climbs. In the two Pyrenean stages, the first climbs of the day started at about 50km in. On the Grand Colombier stage, the climbing started at 98km, and even on the Col de la Loze stage, the Madeleine started at 88km in.

This, Millar pointed out, meant that it would be difficult to isolate leaders from their teams, except when it was too late to do anything about it. When there is a climb early in the stage, an aggressive and ambitious team can strip their rivals of their domestiques. Given that no team leader ever likes to do their own chasing, this opens up the possibilities for moves that favour imaginative tactics over pure physical grunt.

(Of course, it’s not as simple as that. Bahrain McLaren tried that with Jumbo today, and there were still six riders in yellow deep into the Col de la Loze.)

However, there is still hope. Unlike the other major mountain stages, stage 18 to La Roche-sur-Foron will tackle its first climb, the hors-catègorie Cormet de Roselend, after 25km, with three more major climbs to come. The 2020 Tour has been one of the more physical editions of the race, but there’s one more chance for brains to beat brawn.

If you like what you read, why not subscribe to Procycling magazine? As part of our autumn sale, a subscription currently starts at just £5 for the first five issues - that’s only £1 per issue. Procycling magazine, the best writing and photography from inside the world’s toughest sport.