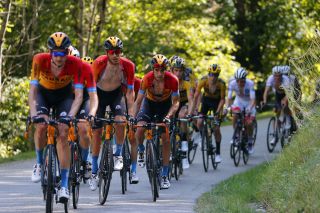 Bahrain McLaren put their necks on the line on the queen stage of the Tour de France, but left empty-handed.

Jumbo-Visma, the team of race leader Primoz Roglic, had widely been expected to dictate the tempo on stage 17 over the Col de la Madeleine and again on the final climb of the Col de la Loze, but it was Landa’s papaya troops who ripped up the script and imposed their own rhythm on both hors-catégorie climbs.

Landa had no intention of attacking as far out as the Madeleine but wanted to set a strong pace all the way to the brutally steep 4km bike path at the top of the Loze, where the race was always going to blow to pieces. When it did, though, with 3.7km to go, Landa was one of the riders who fell away, going on to finish seventh and watching the podium slip further from view.

Despite some question marks over tactics - namely whether they were needlessly performing the role Jumbo-Visma would have performed anyway - team boss Rod Ellingworth told Cyclingnews he had no regrets over the battle plan.

"We gave it a go. The guys, and Mikel, were quite keen to give it a go. We could have sat there and the result would have been the same," Ellingworth said.

"I’m super happy with how the guys rode, it showed that they wanted to give it a go and every one of them played their part. We weren’t just going to sit there and roll round, and fair play to Mikel, he and directors put that together. 10 out of 10 for effort, that’s for sure. I’ve not seen him yet and I’m sure that he’ll be disappointed but he’s closed the gap a bit on Rigoberto [Urán] but the others are pretty strong."

The job started on the Madeleine, with puncheur-sprinter Sonny Colbrelli performing a huge first turn before Wout Poels took it to the top. Matej Mohoric led down the descent, through the valley, and onto the final climb, before Poels returned and Pello Bilbao then took it up a notch from 14km-to-go to 7km-to-go. Damiano Caruso was the last man for Landa on the steep slopes of the bike path, and stayed in front until 4km to go.

However, the plan fell apart as the first turn from another team – UAE Team Emirates’ David de la Cruz – resulted in the yellow jersey group shattering and Landa being dropped. He finished in seventh place, 1:20 down on stage winner Miguel Angel López (Astana).

"Mikel didn’t want an easy pace on the Madeleine. He wanted a hard tempo because we were pretty sure that Jumbo-Visma wouldn’t have been bothered about the break. We wanted a bit more than tempo. I don’t think that he could have done anymore. Everyone has shown their true colours of what they can do. It just came down to the legs," Ellingworth explained.

"[Landa] paced himself and he knew once the gap started that on that climb he’d lose so much if he went deep. So he obviously paced himself well, I think. I think he has to be happy with his ride, he can’t be down, because that’s where he is. It didn’t happen for us but we gave it a bloody good go, that’s for sure."

Ellingworth’s thoughts were shared by the riders who’d spent their days flogging themselves for Landa. "If you don’t try, you never know," said Caruso. "We gave our all and so we have no regrets."

Bilbao added: "We’ve been patient, we’ve been waiting for the right moment, and with the Jumbo team it was really difficult to try something in the other stages, so we waited until today’s stage. We knew we had an opportunity, with the last 6km so hard and also the altitude, and at that point the team was not important, so we tried to bring the race there as fast as we could.

"We used all the power of the team, we all did the maximum effort, and the result was not what we expected but we cannot ask for more from the team. Mikel was feeling good. He usually finishes well in the third week, so we wanted to try anyway from the beginning. We planned everything on the bus, and it went quite smoothly, but then we’ve see the Tour is the Tour and we have so many strong rivals also."

Landa remains seventh overall, but saw his deficit to the race leader grow from 2:16 to 3:27. In the fight for the podium, the only rider he gained time on was Uran, and with stage winner Miguel Angel Lopez (Astana) rising to third overall, he has gone from 42 seconds off the podium, to 2:01.

The penultimate-day time trial will set the final standings in stone but before then there is one more stage for the likes of Landa to give it another go in this Tour, with a day of constant climbing and descending on Thursday’s stage 18.

"Tomorrow we will also try to make a surprise,” said Bilbao. “It’s going to be difficult but we have one more opportunity."