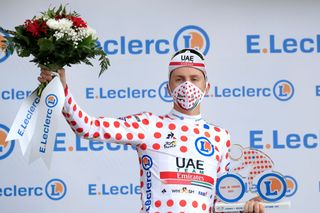 The stage had only two classified climbs but both the Col de la Madeleine and Col de la Loze were ranked hors categorie, with double points at the finish for the Souvenir Henri Desgrange, the highest point in the Tour de France.

Although there were four riders up the road in the breakaway, after Cosnefroy lost contact on the Madeleine, Pogačar saw an opportunity and surged to take the eight points for fifth place. Coming into the stage in third in the mountains classification - two points behind Cosnefroy and Pierre Rolland (B&B Hotels-Vital Concept) - thanks to his victory on the HC-ranked Grand Colombier on Sunday, Pogačar moved into the lead of climbers' competition with 66 points.

Still in the white jersey of best young rider and second overall in the race 57 seconds behind Roglič, the UAE Team Emirates rider still has his sights on a far more important competition, but said he would fight for the polka dot jersey if he can't overtake his compatriot in the general classification.

"I saw that on Madeleine there were 10 points for free (sic) so I went there and then I also got many points [at the finish] -  if I'm in the grasp to take it I will take it," Pogačar said. "I'm happy to have two jerseys now. The objective is still the general classification. If I can't take yellow, I can take this," Pogačar said.

The ASO changed the points spread for the mountains from 2019, when Romain Bardet (AG2R La Mondiale) won the classification mainly on the back of a single result on stage 18 to Valloire, where he claimed 30 points over each of the HC-ranked Col d'Izoard and Col du Galibier to take the jersey from Tim Wellens (Lotto Soudal).

With only five hors categorie climbs in the Tour de France this year and the maximum points halved to 20 except for today's stage 17 finish, the mountains classification has yet to be decided but looks likely to go to one of the riders in the top of the GC, especially considering there are points for the individual time trial for the fastest rider up the Planche des Belles Filles on Saturday.

Cosnefroy isn't totally out of the picture, however. Stage 18 represents the last opportunity for non-GC riders to take the polka dots away from Pogačar, with 47 points available to anyone willing to go on a day-long attack.

While the yellow jersey battle is yet to be sorted out between the two Slovenians and Lopez - all within 90 seconds of each other - there will be equally interesting contests for the mountains, and points, classifications yet to come.